Badgers are stout burrowing mammals, about 22 to 35 inches in length, with fierce dispositions.  They are either encountered as solitary males (called “boars”) or family groups (called “cetes”). Dire badgers are up to twice the size of their normal kin, and giant badgers up to four times the size.

When a badger is injured, it flies into a rage, gaining a +2 bonus to Initiative rolls (and re-rolling Initiative order), and a bonus to attacks and damage based upon its type:  for normal badgers, it is +4, for dire badgers, it is +6, and for giant badgers it is +8.

Badgers can see well in limited light, and they can burrow through soil or loose rock (but not through solid stone).

Approximately 1 in 10 giant badgers has an Intelligence score of 3d6.  The forepaws of intelligent giant badgers are modified to allow the creature to grip and manipulate objects, but are unsuitable for wielding weapons. These badgers may be able to cast spells as a witch (see DCC Core Rulebook, p. 434), although they are usually Neutral. If the Judge so desires, 1 in 10 of these spellcasting giant badgers is actually a wizard of level 1d5, and 1 in 20 has the ability to call upon the King of Elfland (or a similar fey- or nature-themed patron), as per Invoke Patron, once per week. 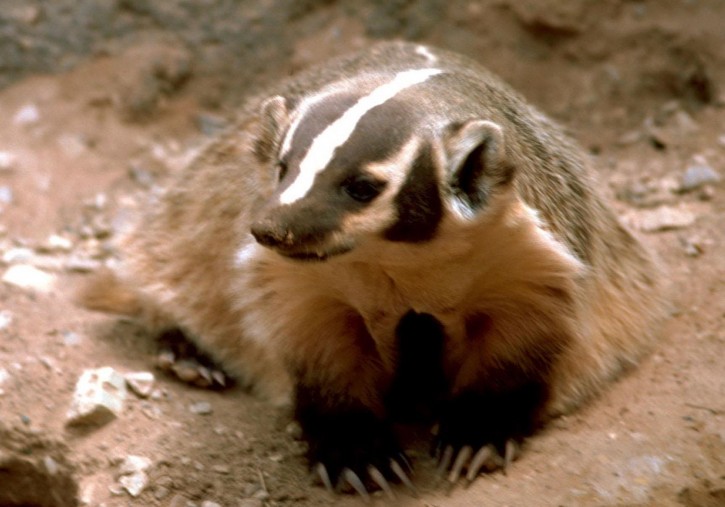 Although badgers are not evil, they do not typically love humans. Some men have been known to capture them for sport, making them fight bears or dogs in large pits. They will, therefore, sometimes work with Chaotic faeries to bring about the downfall of those who wander too close to their dwellings.
Posted by ravencrowking at 22:01