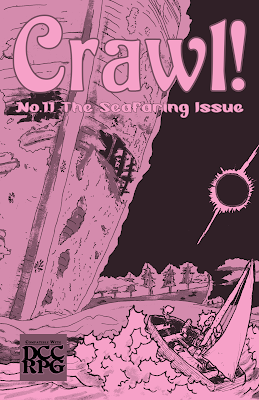 If you are playing Dungeon Crawl Classics, and your campaign takes place anywhere near water, Crawl! Fanzine #11 is essential reading. If you are playing any OSR-type game, and want to add a naval element, this issue is probably useful.

Naval Warfare for Ocean Crawlers, by Bob Brinkman, is an extremely simple and fast system for conducting any naval battle, from the simplest to the most complex, using any level of technology. Mr. Brinkman's companion article, Nautical Might Deeds, makes it easy for the judge to move battles from ship scale to personal scale, as your PCs do their best to outshine the heroes of Appendix N fiction.

If Mr. Brinkman's work was the only thing in this issue, that would make it worth the price all by itself. And then some. But, of course, there is more.

Fantastic Forms of Sea Ship Propulsion and Their Congenital Complications, by Rev. Dak J. Ultimak, provides some unusual ways to make ships move around in your campaign world. These can be used wholesale to make all of your ships strange, or they can be sprinkled in to add a dash of weirdness to your world - roll 1d8! I did note a nod to Jack Vance, which I very much appreciated. Also, there is a new monster that can be used whether or not they are moving a ship around the sea.

The Deep Elders is something I wrote, which ties into The Portsmouth Mermaid (Purple Duck Games), but which can easily be used without the FT Series of modules. I am gratified to note that it reads better than I remembered from the submissions process, and it is accompanied by evocative art. Really, the art in this issue (by Mario T.) shines.

Life Aboard, by Sean Ellis, provides a simplified method for adjudicating trips by sea, which nonetheless allows for all of the complications one might expect. The judge can use his best discretion to determine what each event means if he has a map of the region, and thus allow the PCs to discover an uncharted island, an oceanic lair, or the like. Again, this stuff is extremely useful, both in terms of a working system for fast game play, and as an idea generator.

Rev Dak has managed to put together some really good material in Crawl! over the course of eleven issues. This issue is right up there with #2 (Loot! - including extra equipment, a list we use all the time) and #8 (Firearms!) as issues that will get a lot of table play if you have them. Not that any issue of Crawl! isn't great....but these three issues have an extremely high reuse value.

(Issues #3 and #5 - Magic! and Monsters! respectively - may also have a high reuse value, depending upon your table. Magic! includes a really useful idea for using OSR-rules spells in DCC without conversion, so that you can run something like Barrowmaze without rewriting every odd necromancer or cleric of Nergal the PCs might encounter. Monsters! contains an easy reference for creating level-appropriate DCC creatures, if you want extra help with conversions or statting out your own fell creations.)

You can pick up issues of Crawl! here.