Let's finish this up, then, shall we? 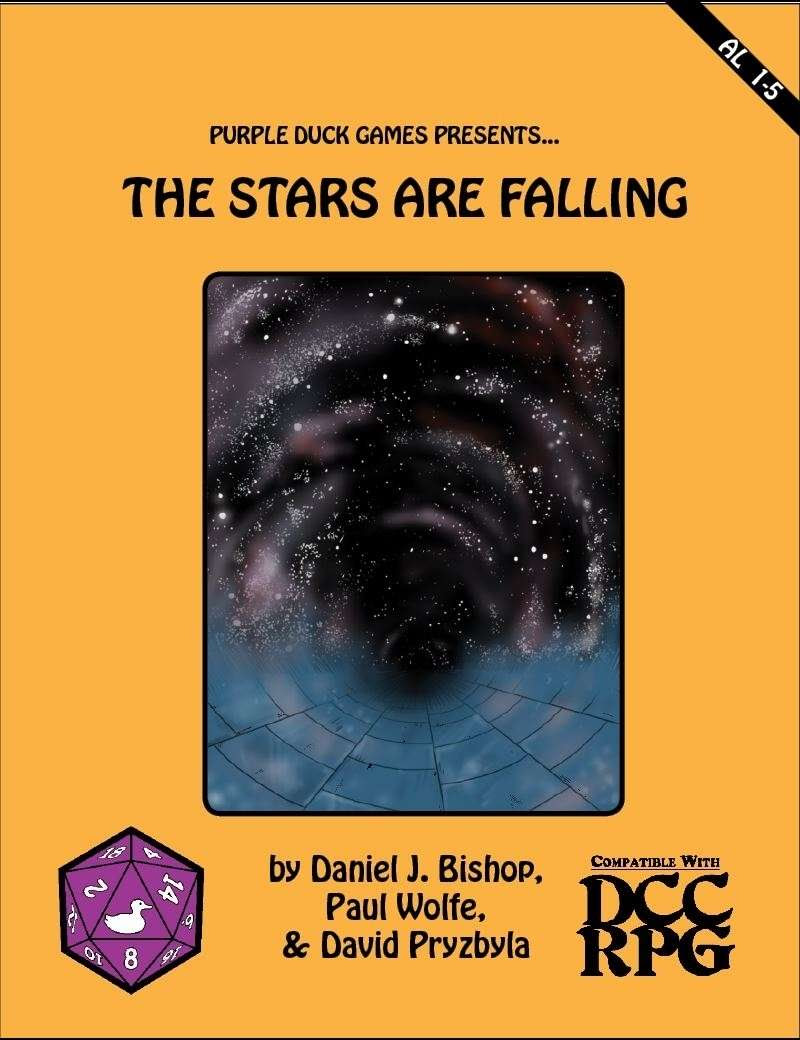 The Stars are Falling (Purple Duck Games):  This is a compilation of the first five Adventure Location modules published by Purple Duck Games.  I wrote three of the five adventures, with Paul Wolfe and David Pryzbyla writing the other two.  I also wrote a short introduction that frames the five as a single adventure path, and it is this extra bit that made me list this item separately.  If you need an example of how to turn a series of adventures into a campaign, this product will supply one.  It also combines five pretty good adventures at a reasonable price, in both print and pdf.

For some reason, this product doesn't come up in the Dungeon Crawl Classics section at RPG Now, which is likely to be hurting sales for Mark Gedak, but you can get it here.  If you were considering buying the adventures contained within, this is a really good deal.

The Stars are Falling contains Bone Hoard of the Dancing Horror, Sepulcher of the Mountain God (by Paul Wolfe), Through the Cotillion of Hours (see below), The Waystation (by David Pryzbyla), and Stars in the Darkness.

The Thing in the Chimney (Purple Duck Games):  I talked a little bit about how this came about in my last post, so I will try to avoid retreading that ground.

When I first decided to do a holiday module, I set it up as a free download with the permission of Joseph Goodman, but without the DCC RPG compatibility logo.  Eventually the free hosting service I was using gave the link address to something else, and The Thing in the Chimney was lost to those who wanted it. As a result, there are two versions of this adventure floating around the DCC community - the initial, free pdf with donated art by the talented bygrinstow, and the combined version with The Nexus of Yule in The Perils of the Cinder Claws, with art by Jacob Blackmon.

The Thing in the Chimney is reviewed here, here, at the Iron Tavern, and at Tenkar's Tavern (and, yes, that was the cover of the original free download you see at Tenkar's Tavern).  I am going to quote Patrick R. from the first review, for those of you who do not follow the links, because these are some of the kindest words imaginable:


I just finished running "The Thing in the Chimney" (the first of two adventures in this excellent product) as a Judge. Honestly among the most fun I've ever had in a fantasy RPG session and I've been playing for more than 30 years!

The Thing in the Chimney is available as part of The Perils of the Cinder Claws in pdf format here.

Through the Cotillion of Hours (Purple Duck Games):  The name of this module came from a poem I wrote about Internet dating, back in the days when the Internet was called "Bulletin Board Systems" and most computer screens had amber monitors with graphics that were no better than those used in Pong.

This adventure takes place in a dream world, but one that can have real consequences on the dreamer(s). Well aware that some players might balk at entering the cotillion, I had to ensure that there was a method to keep the waking characters from simply slaying or stealing from their deep-sleeping brethren.  In addition, parts of the module would have to be described by the judge so as to reflect the dreaming PC's actual adventures.

This was also the first module in which I created patron information for a being actually encountered in the module.  The idea of directly marrying patron to game events is pretty obvious, but it makes for more organic play, and it is an idea I revisited again in The Revelation of Mulmo, The Black Goat, The Perils of the Cinder Claws, and Prince Charming, Reanimator.  Harley Stroh does the same in his excellent Beyond the Black Gate, as does Paul Wolfe in Tomb of Curses, Forsaken Reavers of Praeder Peak (in D.A.M.N.! Issue #1) and his upcoming The God-Seed Awakens.  To my mind, this is entirely consistent with how patron-like entities are used by many Appendix N authors, such as A. Merritt, Philp Jose Farmer, and Andre Norton.

When I first ran this adventure, it instantly became the favourite of my older daughter, and remained in her #1 spot until I ran Michael Curtis' Frozen in Time at Wizard's Cache in Toronto as part of the 2013 DCC World Tour.  So, Kudos! to you, Mr. Curtis!  My daughter had the only character who survived the final event of that adventure.  Let us say that the PCs really went to the edge.

Reviews of Through the Cotillion of Hours can be found at the Iron Tavern, Tenkar's Tavern, Endzeitgeist, and by Megan R. here.  It can be purchased in pdf or print here, or as part of the larger The Stars are Falling collection here. 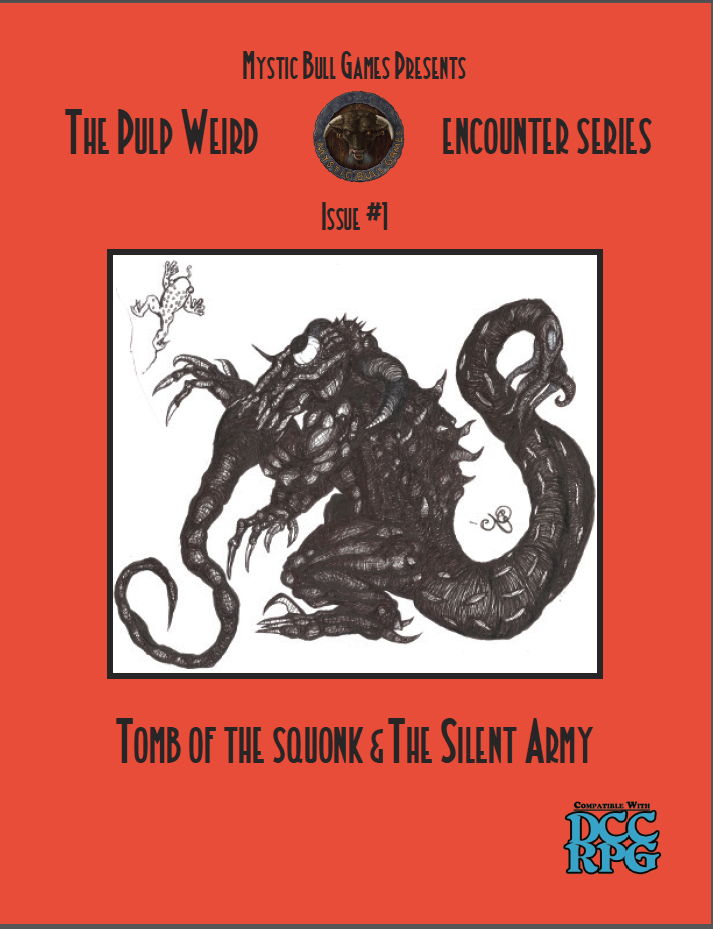 Tomb of the Squonk (Mystic Bull Games):  When I was first working on In the Prison of the Squid Sorcerer with Mystic Bull Games, Paul Wolfe supplied me with two pictures and a challenge to write an adventure that made use of the artwork provided.  One of these pictures is on the cover of Pulp Weird Encounters #1: Tomb of the Squonk and the Silent Army, wherein you will find this adventure.  The adventure was simply too long to fit into the aforementioned book without significant chopping, and the chopping so drastically altered the adventure that I was unhappy with the result.  As a consequence, it was reserved for the time, and published later.

I am an aficionado of folklore and legend, so I well know the stories of the hodag, the hide-behind, the flitterbick, and the squonk.  With an illustration of a hideous swampy creature and the caption "just misunderstood", stories of the squonk - a hideous beast which, if captured, dissolved in its own tears - sprang instantly to mind.  But was the squonk really misunderstood?  Having recently read a lot of Philip Jose Farmer, I decided to make Tomb of the Squonk a tribute to his World of Tiers series, creating a group of Patricians to take the place of his Lords.  Of course, this is not the World of Tiers, and references to other Appendix N authors are also included.  If you miss the Fritz Leiber nod, you are not paying attention.

In the core rulebook, Joseph Goodman points out that there is no expected amount of treasure for any given encounter, and this adventure includes only the treasure that I decided would logically be present. Some judges may wish to up the value of what is there, but I do not recommend it.  If your players are like mine, they will figure out how the traps work, and then decide that the location is useful for their own purposes. Obviously, if the squonk succeeds in his last attempt, the PCs will be thrust into a new adventure elsewhere, but even if the squonk does not succeed, the wise judge will have a few strange adventures prepared in the event that the players themselves decide to pass through the gates provided.  When I ran this, the PCs ended up in Lamentations of the Gingerbread Princess, and called upon divine assistance to escape before they got to the main area of the adventure.  They were spooked by a big bear!  Well, that and the realization that the world they were in was, itself, actively hostile to them.

You can find a review here and at Tenkar's Tavern.  You can pick up the adventure in pdf format here.  This is another adventure that really deserves more attention than it has received.

Tower of the Black Pearl (Goodman Games):  This is actually the second Harley Stroh DCC adventure written for Dungeons & Dragons 3.5 that I was lucky enough to convert to the DCC ruleset.  Apparently, Harley was going to convert it himself when he failed a Luck check and injured his arm.  As a result, I got the opportunity, along with some notes from Harley and Joseph Goodman about what they wanted done.

Doing my initial read-through, I discovered that this was the first appearance of Sezrekan the Elder! Moreover, somewhere in the process of writing the DCC rpg, Azi Dahaka had beaten him up and took some of his stuff.  Because Joseph wanted to make use of the original illustrations, I had to find a way to make the multi-headed draconic imagery work for Sezrekan without making him seem like Azi Dahaka, and include more Appendix N elements.  If you have both versions, and didn't notice the changes, I did my job.

Among the other changes was a desire to ensure that the magic items included in the text were DCC-ified, which is always a pleasure.

Here's a review from Tenkar's Tavern and a review from Megan R.  Although physical copies are sold out, you can still get it in pdf here. 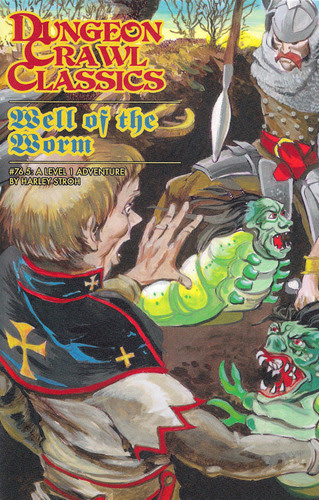 Well of the Worm (Goodman Games):  This was the first Harley Stroh DCC adventure that I converted from Dungeons & Dragons 3.5 to the DCC rules.  Challenges included turning a dwarf wizard in to a human wizard who had become dwarfish due to corruption, reducing the amount of treasure, and making the "common" monsters mysterious.  The original version of Well of the Worm was created with the assumptions of D&D 3.5, including the omni-presence of various demi-human races.  I wanted to make the version I turned in more "Appendix N", and that meant toning down the demi-humans considerably.  No more do dwarf armies march across the surface lands in this adventure, and feral elves are not used where humans villagers will suffice.

I would really enjoy the opportunity to convert other earlier Goodman Games materials, including some of the 4th Edition modules, to Dungeon Crawl Classics.  If you are a publisher with materials for any edition of any game system that you think would adapt well to DCC, please contact me.

If you are a DCC judge or player who would like to see this sort of product become a reality, please bring it up on the Goodman Games Forums, or with your publisher of choice!

Here is a review by Alexander Lucard and another by Bryce Lynch.  Although print copies are sold out, you can still get a pdf here.

END NOTE:  Well, that's it.  Apart from some spot illustrations, that's what I've done for Dungeon Crawl Classics to date.  I have a (perhaps insane) desire to place something with every company publishing materials for this most excellent game, so, if you are such a publisher, feel free to contact me.

Next post will be on to something else, and if you have any topics you would like me to address, now is the time to make your desires known!
Posted by ravencrowking at 12:36