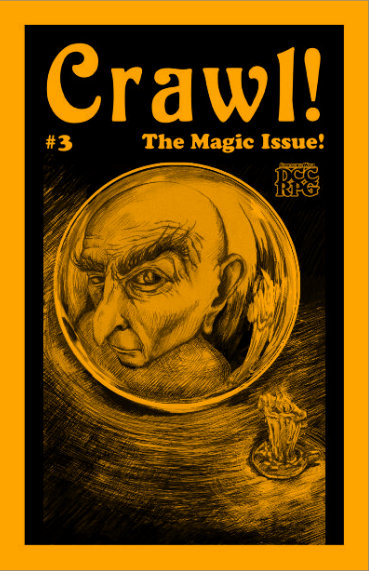 Magic Wand Spell (Straycouches Press):  My version of a magic wand spell appears in Crawl! Fanzine issue #3 (The Magic Issue), which you can get here.  If you want, you can read my version of this DCC spell for free in this blog post, but the Crawl! issue has a lot of other good stuff in it, and is worth picking up.

Mermaids From Yuggoth (Mystic Bull Games):  So, Paul Wolfe had some artwork available, and he asked me if it was possible to write an adventure that made use of it.  This was the result.  You can find it in  In the Prison of the Squid Sorcerer.  Mermaids is is an event-based adventure that is intended to be played amid and between other quests.  You can find reviews here.  The Iron Tavern, Tenkar's Tavern, and Melan offer reviews.  You can get it in pdf here or in softcover print here.

Prince Charming, Reanimator (Purple Duck Games):  This is the first adventure for Faerie Tales From Unlit Shores, which is an idea I had some time back, but had shelved because I was busy doing other stuff. Basically, the idea is this:  What if you took a bunch of fairy tales, cross-linked them to Appendix N fiction, and then turned them loose on an unsuspecting world?  In addition, what if I created a series of linked adventures that ran from Level 0 to Level 6?  What if, at the same time, I could help a friend fund her kickstarter (Raechel Henderson's Eggplant Productions kickstarter for Spellbound & Spindles).

It is an ill-kept secret that I love working with Purple Duck Games. Mark Gedak has to be one of the nicest people in the industry, and someone I trust implicitly both to be fair and to make my words shine.  Why? Well, here is one example.  When I started this project, Mark offered to help me make Prince Charming, Reanimator both professional and available for free in pdf.  He paid for maps and art.  The deal was, I was going to do the work for free.  Well, that wasn't good enough for Mark, and he gave me a percentage of whatever folks donate via the Pay What You Want version.  If that is not class, nothing is.

You can get a softcover print version here, or as a "Pay What You Want" pdf here.  You can find a review here.

Silent Nightfall (Purple Duck Games):  Another reason why I love Purple Duck Games.  The basic idea for the CE Series was that I wanted to produce materials that could be used on the fly by a judge in need of (1) a short scenario, (2) something in case players wanted their characters to Quest For something, or to meet the needs of patron and divine quests, and (3) something that would be re-usable by the judge.  The idea was that the judge should get the most bang possible for his or her buck.

I was going to write these things anyway, because I needed them for my home game.  I contacted Paratime Design's Tim Hartin to create some maps for me.  I was thinking about eventually publishing, so I asked Mark Gedak for a rough estimate as to whether or not the map prices were right.  Not only did he agree that they were, but he offered to pay for them, and to publish the work.  Hence, the CE Series.

Silent Nightfall has the only map that I specifically suggested to Tim.  The actual adventure is more science-fantasy than pure fantasy, in line with the Changeling Earth saga by Fred Saberhagen and the Hiero books of Sterling Lanier.  It offers appendixes that give quick rules for learning languages, demi-patrons, simple tables for creating strangely aberrant creatures (as well as some examples), and an NPC organization. If the party is not careful, this could blow up in their face!

Here's another reason I love working with Purple Duck Games.....I am a big fan of the OGL, and treating the community like a community.  All of the writing in the products I have done for Purple Duck, including the appendixes, is OGC.  So, drop the language rules, the demi-patron text, the monsters, whatever, into your own product. So long as your OGL is correct, you are golden.  Planning a Swords & Wizardry monster book?  You can convert the dancing horror from AL 1, or the grallistrix from Silent Nightfall without any cost to you.  You don't even need to ask permission (although I would really appreciate hearing about it!).

You can find a review here, at the Iron Tavern, and at Tenkar's Tavern.  Buy Silent Nightfall in print or pdf here. 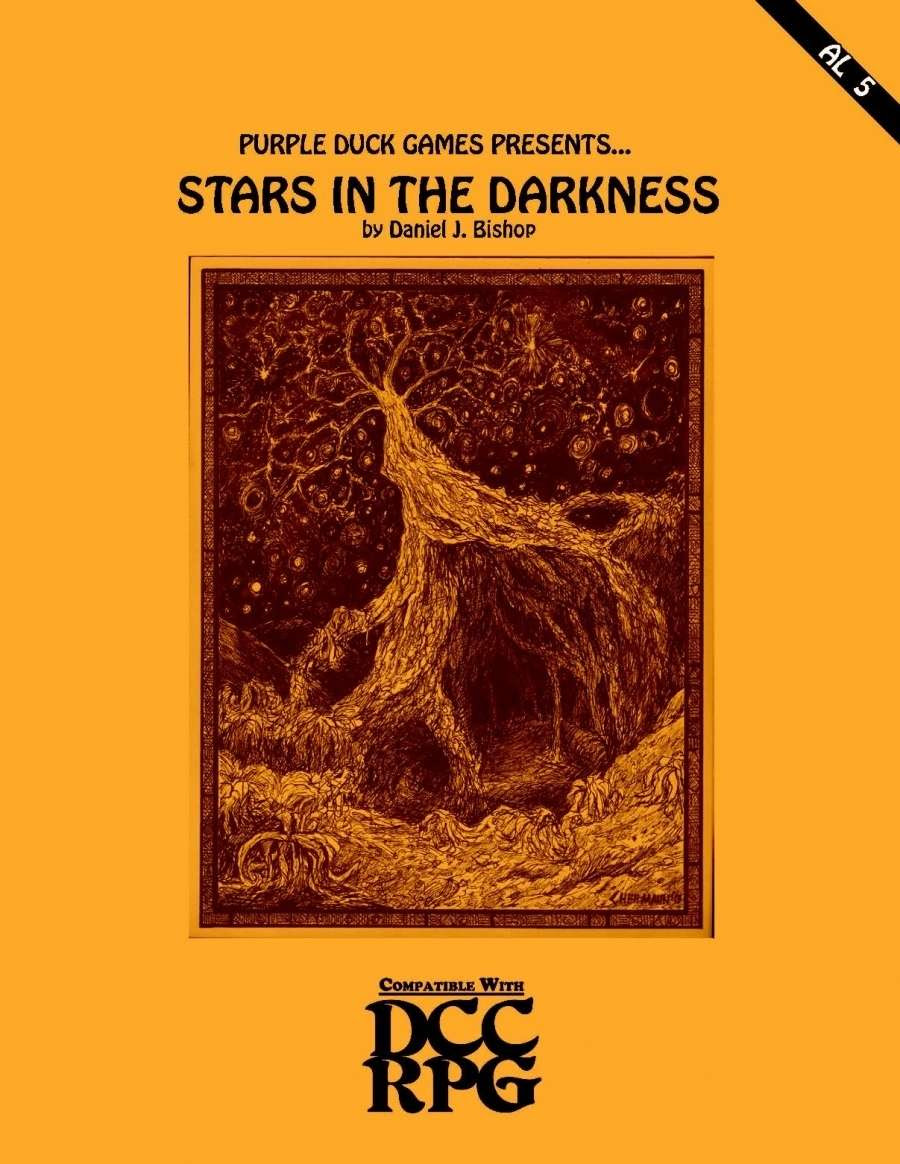 Stars in the Darkness (Purple Duck Games):  A module in the Adventure Locale series, Stars in the Darkness pits your PCs against degenerated ancestral elves and the embodiment of a black hole.  Really.  If you are wondering how to make your elves less Tolkien and more like those of other Appendix N authors, this isn't a bad place to start.

"How do you get your ideas?" some ask.  Well, if you look at the maps in this adventure, which were already created, you might be able to see how the adventure was inspired by the cartography.  Those really do look like star/asteroid fields in the chasms indicated on the map.  The Stonehenge-like structure indicates a stellar observatory, but what kind of observatory is built below ground?

Coupled with this, the idea for the cosmic tree arose from a piece of artwork my friend Chris Heilmann created, which was re-imagined for the front cover of the adventure.  Other inspirations include the work of Fritz Leiber, Margaret St. Clair, Rider Haggard, and H.G. Wells.

You can find reviews at Endzeitgeist, Tenkar's Tavern, and the Iron Tavern.  You can buy it in print or in pdf, as a single adventure or as part of the larger The Stars are Falling product.

The Arwich Grinder (Straycouches Press):  Some time ago, I decided to write something for Crawl! Fanzine, mostly because I really enjoy reading Crawl! and I like Rev Dak.  Several issues passed between the time that I submitted this 0-level funnel and its actual publication, but it is out now and I am happy to be able to talk about it a little.  The first public mention was, I believe, on the Spellburn podcast back in October.

This is what happens when you try to write something that truly captures the feel of H.P. Lovecraft for the DCC game.  Those familiar with Mr. Lovecraft's work will recognize that Arwich is an amalgamation of Arkham and Dunwich.  Any who has read, run, or played through the adventure will, if he is familiar with the macabre works of the aforementioned writer, recognize many references.  Most of them are not horribly subtle.

When I first embarked on writing the Grinder, I went for as pure a Lovecraft mood as I could, and I had recently re-read about 50 of his stories.  There were times, writing this, when I had to walk away from the laptop because some of the ideas/set-up are a bit disturbing.

Two of the playtesters were my older daughter and a friend of hers, and as they discovered the secrets of the Grinder, their reactions became visibly more involved in the horror of the story.  From a certain standpoint, it worked as well or better than I hoped.

I later learned that they had talked about it with friends at school - a unique instance as far as I know - one of whom at least then decided that I was "cool" based on having come up with one of the encounters.......the one with the iridescent bubbles.

The Black Goat (Purple Duck Games):  I've already talked some about the Campaign Elements series, so I won't repeat that too much here.  In this case, Tim Hartin's map was of an inhabited mountain pass with caves.  What could I put there?  The back of the DCC core rulebook has some tables for "spicing up" humanoids, and I played around a little with those, which led to the two new humanoid groups in the module.  On top of that, the "Quest For It" mantra made me include the Black Goat herself, a new patron for DCC with plot hooks built in.

This was not simply a "left over" from Angels, Daemons, & Beings Between - I devised the Black Goat wholly for this module.  Practice may not make perfect, but it makes better, and I now have no hesitation whatsoever to include new patron materials in any project where they seem appropriate.  Having read all of the "required reading" from Appendix N, and quite a bit of the listed authors' additional work, I have come to believe that the game is best when patrons have at least some explicit goals within the game milieu.

You can find reviews of The Black Goat at Endzeitgeist, Tenkar's Tavern, and the Iron Tavern, as well as this delightful review by Megan R.  You can purchase it in pdf here. 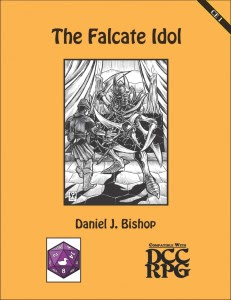 The Falcate Idol (Purple Duck Games):  This was the first of the CE series.  In this case, the map was obviously of a temple or shrine, but there were two definite "streams" to explore - the main shrine and the hidden under-shrine.  I was able to put different end-point goals in each, so that the judge can re-use the material to allow for a second foray.  I also had to give a reasonable amount of material for the Cult of the Harrower, with the expectation that PCs may enter the area during services, or that judges may be open to PC clerics worshipping this deity.

You can find reviews at Endzeitgeist, the Iron Tavern, and Tenkar's Tavern.  The product is available for purchase in pdf here.

I have two more posts in this series to do before wrapping it up, largely because I wrote a bunch of stuff.  At this moment, with the exception of the "Pay What You Want" version of Prince Charming, Reanimator, I don't get any extra money if you pick these things up.  Yet, I do hope that you will consider picking them up, both to support the publishers who have been so kind as to make this stuff available, and because I think you will find it useful in your DCC campaigns.  Of course, that also means that said publishers are more likely to buy additional scenarios & materials I write, which does feed back into my pocketbook, so take it all with a grain of salt.

I have tried to make this interesting without revealing too much about the products.  I have heard "Where do you get your ideas from?" a few times, and I've tried to give some of that here.  What sorts of background info would you like to hear?  What would make the next couple of posts more interesting for you?
Posted by ravencrowking at 13:22