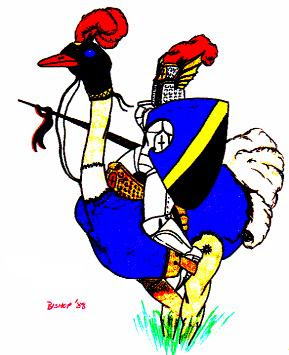 Imagine, for a second, that Quest For It doesn't require a new house rule, but that each quest is individually tailored. What does Quest For It entail?

(1) Clearly stated (or understood) goal. The player must indicate what they are interested in for the judge to respond appropriately:

(2) The means to uncover a quest. There has to exist in the game some method for the judge to, in turn, allow the player in question to know what is required. For instance, sages, oracles, monsters (ghosts, cyclops's, etc.) with knowledge hidden from mortals, etc. More than half of the CE Series contain something of this nature for that very purpose:

"The donkey head hanging in the castle courtyard has been known to give advice to the worthy."

"Bathing in the blood of the Nemedian Lion will make you stronger than any natural means can provide."

There might even be a quest to prove worthiness in order to receive the needed advice!

(3a) Steps are concrete, with some metric to determine progress:

"The Nemedian Lion can only be harmed by the Runesword lost when the Kingspire fell."

(3b) Limitations can be built into the quest:

"The Nemedian Lion can grant its strength to only one mortal; trying to share it amongst comrades dilutes its power greatly."

(3c) Quests can have consequences of their own.

"Whosoever hold this power is cursed of the gods, though, and cannot benefit from idol magic."

(3d) Those consequences can lead to other quests:

"Only by sacrificing the Jewels of the Carnifex to the Crimson Void can this curse be lifted."

Quest For It should feed into adventures, offering a solid hook or a series of solid hooks to motivate and add an extra dimension to game play. It should lead to interesting choices, balancing the cost and benefits of the Quested outcome so that the PCs are never quite sure if they have gotten a good deal or not.

You can make quests as simple or as elaborate if you want - going from 8 to 9 Strength might require nothing more than 8 weeks of fitness training - but the players should be able to mark their progress toward the goal by successfully completing steps along the way, with discernable outcomes.