Giant Walking Eye...Relays What It Sees 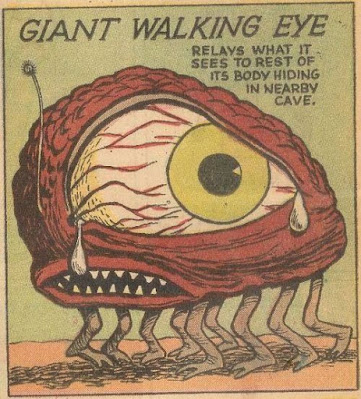 The Giant Walking Eye roams the world of Terra A.D. (or DCC), as a gigantic red thing a good 8' tall. It relays all that it sees to the rest of its body, which hides in a nearby cave. It can transmit up to 5 miles, but usually stays much closer to the rest of it.

If the eye itself is an 8' tall thing, imagine the size of the creature it belongs to. Even when you take into account that the actual "eye" portion is only about 4' in diameter, and that it is a great goggly-eyed thing, the monster itself is easily over 80' tall....and that eye is really large in proportion to its body! In fact, those stats are extremely generous to the PCs who might encounter this thing. It could easily be much, much worse.

Also, it has two eyes, and the other one is probably around here somewhere.

Also, there is probably also a giant wandering nose....with a disgusting special attack!