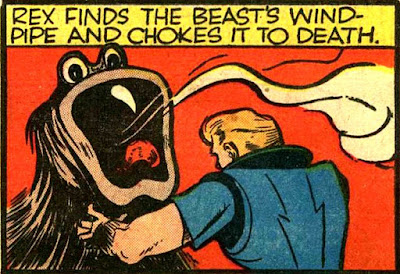 The so-called Beast is just a goofy-looking critter with a single tooth that is no longer than a short sword. It is intelligent, and not particularly malevolent. It is, instead, good at sneaking around settled areas looking for livestock to feed on.

Rex the Strangler will certainly use weapons, but his grasp attack is feared throughout the land. When Rex succeeds with a grasp attack, he grips his opponent's windpipe and begins to choke it to death. Each round of choking (including the first) requires a Fort save. When the first Fort save fails, the opponent is unconscious. When the third Fort save fails, the opponent dies. The initial DC is 10, but the save DC increases by +4 for every additional round Rex the Strangler maintains his grip.
Escaping Rex's mighty grip requires either an opposed Strength check (vs. +4) of a Mighty Deed result of 5+. Rex is not that strong overall, but his wrists and iron-muscled fingers are superhumanly powerful.
Luckily, Rex the Strangler practices his art only upon those creatures that he views - correctly or not - as real threats to his community!
Posted by ravencrowking at 18:16