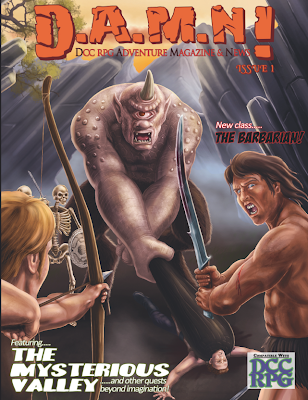 An adventure for 6 to 10 characters of levels 2 to 4. Taking place in the tropical setting of Praeder Island,  the players will have to brave the harsh wilderness, battle reptile ghuls and uncover a new patron, The Queen of Abominations.

An adventure intended for use as a mini-sandbox. Inspired by the works of the late Ray Harryhausen, the players will learn of the wizard Harhasen. With laboratories beneath his tower, he bred monsters from both Men and Animals.

The City of Thalos, built by Elves, was said to be the City of Eternity. The city that was lost under ice,  has now been unearthed by Dwarves. The players must now battle both foes and the winter climate to uncover the mystery of The Snow Queen.

A new warrior inspired class for DCC RPG,  The Barbarian offers players an alternative to the warrior class.

Want to run that favorite module for DCC RPG? Well now you can! Daniel offers the tools you need to convert material from other systems for use in DCC RPG.
Posted by ravencrowking at 07:31