As a player or as a GM, no fudging please 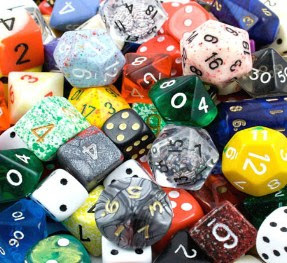 Every so often, the old question rises again:  should the GM ever fudge?  In examining this question, I am going to define fudging as changing the outcome of die rolls, or the meaning of their outcome, during the course of actual play.

People can fall on either side of the “fudging” debate, and many people are divided in how they feel , but I have never encountered any single instance where I think the game would be improved by fudging.

Not fudging makes the GM a slave to the dice.

No.  The GM chooses when the dice are rolled, and chooses what dice are rolled.  The dice are still a tool; the only thing that changes is that the GM is firm in his decision to use that tool and brave enough to abide by the results, even if they throw him “off script”.

Fudging is the same as prep work.

Fudging is a good tool for developing GMs to learn the trade.

Consider a case where the GM decides that Trap A does 3d6 damage, and that 3d6 damage is rolled with a result of 18 against a character with 14 hp.  In this particular case, having the PC die is not “on script” for the GM – it throws his “plot” off the rails.

In the case where the GM does not fudge, he learns to adapt to new situations, and he learns that throwing the plot off the rails is what players do.  It is what makes their choices meaningful.  He also learns that he needs to consider the possible effects of anything he throws into the game – if he does not want PCs to die from a failed save, for example, he should not include save-or-die effects.  By seeing the outcome of unexpected game events, his understanding of what can happen is increased.

In the case where the GM fudges, he learns that changing the die roll can keep his adventure on the rails, negating the effects of player choice.  He learns that prep work is not really important – he can just change stuff mid-stream.  He does not develop anything outside his comfort zone, as game events cannot take him there, and he reinforces his “plot” over the tapestry of context, choice, and consequence which the game becomes without fudging.

I only fudge when it is important.

Then you are fudging at the worst possible time.

When it is important is when player choices matter the most, and you are removing the ability of your players to have their characters succeed or fail by those choices.

I only fudge when it is not important.

If it is not important, why not let the roll stand?  Why are you even rolling at all?

It doesn’t hurt the players if they don’t know.

Consider trying to learn chess, where your uncle keeps letting you win no matter how poorly you move.  If you think your uncle is doing his best, it might make you think that you are a great chess player.  But it will quickly prove otherwise when you play someone who isn’t handing you the game.

Did your uncle’s “kindness” in letting you win help you or hurt you?

So too with the fudging GM.


It’s the same as when you roll a die to make something appear random when it is not.

It’s my game and I can do what I want.

Yes.  Yes, it is.  And if you can find even one player who wants the same thing, you should play the game that you want to play.

But let me quote Mr. Joseph Goodman, if I may, on page 314 of the Dungeon Crawl Classics core rulebook:

Wise words, in my humble opinion.
Posted by ravencrowking at 21:54