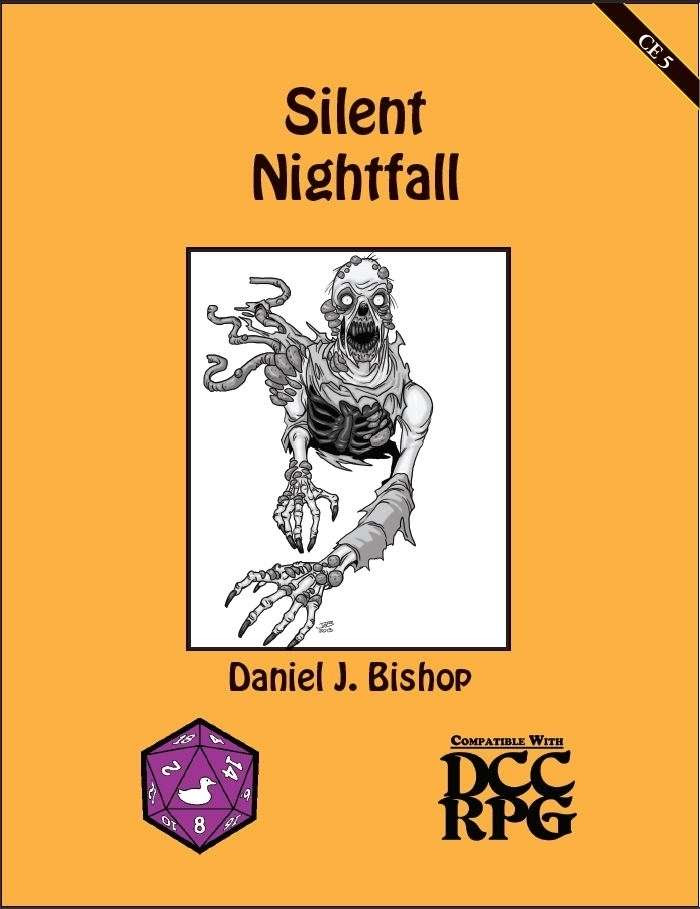 Silent Nightfall, the most recent of the CE series, is now available at RPG Now.

This was playtested by a crew starring Jen Brinkman, the First Acolyte and Unofficial High Priestess of the Spellburn podcast.

There is a lot going on in the 21 pages of content (not counting the OGL), and, as is the norm for Purple Duck's DCC materials, all text is OGC.

There are often periods of greater or lesser magical influence in the world. Millennia ago, during a period of reduced magical activity, there was a nuclear power station at this location. When magical influences began to spread once more, the nuclear core became unstable, and began to develop a form of malevolent sentience.  The ancients placed the core in a shaft three miles deep, the last 500 feet of which were filled with heavy water.  This shaft, and its attendant control center, were given the codename “Silent Nightfall”.

In the ages since, much of the complex has collapsed or ceased to function, but the main shaft still remains, going three miles deep into the ground. The rooms that remain have undergone great changes, having been used for many different purposes and by many different creatures over the centuries. As a result, the original purpose of the shaft, rooms, and corridors has become
obscured.

Silent Nightfall is usable with characters from level 2 and up in a campaign setting, but players may find parts of it extremely challenging, so judges - know your players!

Includes appendixes on Aberrations (including 5 new monsters and a random table!), Demi-patrons, Languages, and the Radiant Brotherhood, I hope you will find this one a great value for your game!