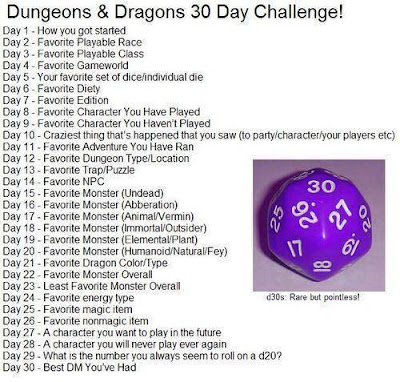 So this last little bit has been somewhat quiet, and I apologize for that.  Let's see if I can't catch up with this 30-day challenge thing just for the hell of it.

Day 1:  I started playing rpgs with the Holmes Basic Blue Box, which I picked up for my younger brother for Christmas in 1979.  My interest was piqued by seeing a television spot on the game (I lived in Wisconsin, so this is perhaps not so unlikely as it may sound) that seemed really, really cool.

Day 2:  Human.  Humans form the baseline for most of my campaign worlds.

Day 3: Right now?  The Wizard, because I am playing Dungeon Crawl Classics, and the DCC wizard is so frakking cool.   As a player, though, I am willing to play any race or class.

Day 4:  Whatever game world I am currently running.  I confess a fondness for the original Forgotten Realms, and for Greyhawk as it was presented in the folio.  Spelljammer was a cool idea that, while I never ran it directly, I stole lots of ideas from for both monsters and fleshing out the cosmology of the system in which my games have taken place.

Day 5:  The seven sided die pictured here.  I know that it is considered ugly by some gamers, but I really, really like it.  Most of my players prefer to roll the other d7s (the ones that are really d14s marked 1-7 twice in various colours), but they are not so cool (to my mind) as this thing.

Day 7:  Dungeon Crawl Classics.  Before that, I would have to say 1e AD&D, any day.  A lot of 1e modules, let it be known, are perfect for conversion and running in the DCC system.  But I am a tinkerer; I will steal useful ideas from anywhere.  At one time, I was going to write my own system.....

Day 8:  Porthos, a bit of a swashbuckling toff using the 2e rules.  I read bits and pieces of Romeo & Juliet (esp. Mercutio's lines) prior to play.  A lot of fun.  Other notables:  Aramas the elven psychopath, Damien the Undaunted (human magic-user under Holmes Basic) and Arak the Spidersoul (human magic-user whose name was swiped from an issue of White Dwarf, if memory serves).

Day 9:  I created a jedi guardian for a d20 Star Wars game that never got completely off the ground.

Day 10:  Sorry, but I am not sure where to begin with this one.  I've run many of the Dungeon Crawl Classics modules, and there are some pretty crazy things in Sailors on the Starless Sea and Colossus Arise! I can tell you.  I also ran The Albuquerque Spaceport module (from Gamma World 1e) as a DCC adventure, and my home group ended up with a moon buggy.  They then entered the domicile of the Cinder Claws, where one PC was killed by a snowman.  Running Doom of the Savage Kings, one PC was saved when his miscast spell caused him to be completely severed from the world for long enough to avoid the Hound of Hirot.  Best. Fumble. Ever!

Day 11:  Again, I don't know where to begin with this one.  For sheer re-use value, I would have to say Keep on the Borderlands.  But, oh, did I have fun recently with Michael Curtis' Frozen in Time.  I can't say that I have a favourite adventure.  How do you compare Death Frost Doom and The Village of Hommlet?  They are different animals altogether.

Day 12:  An interesting one with a reason for being there, and a history.  Apart from that, I like crypts and catacombs, natural caves, lost worlds.....just make it interesting and somehow unique. 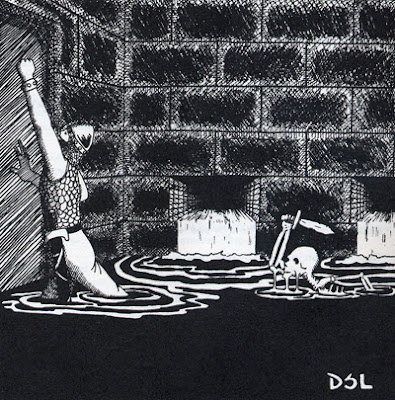 Day 13:  The humble pit trap.  Always good, even when it is located prior to being fallen into, and allows for an infinite variety within the basic form.

On the other hand, this image from the 1e Dungeon Master's Guide has stuck with me through the years.  I can hardly be alone in this; variations of it have cropped up in other editions.

Day 15:  The coffer corpse.  A good un-dead monster, brought to you by the 1e Fiend Folio, and one which recently scared the crap out of 4th level Dungeon Crawl Classics characters.

Day 16:  Right now, I am going to have to say the Dancing Horror from my own Bone Hoard of the Dancing Horror, but I will also specify that the nascent dancing horror (should one appear) is a better/more horrifying monster.  I am also very fond of the grell (1e Fiend Folio) and the grick (3e Monster Manual).

Day 17:  I like giant spiders of all types, as well as giant ants.  Animal-wise, I think a good mix is preferable to any specific animal type, and I think it is important to include non-predator animals.  An encounter where a doe is spotted in a sun-dappled clearing, with a fawn not far from her side, is a good mood-setting encounter, takes no real time to play, and makes the world seem more real.  The giant goat in the 1e Monster Manual was an animal that I always wanted to use more than I have.