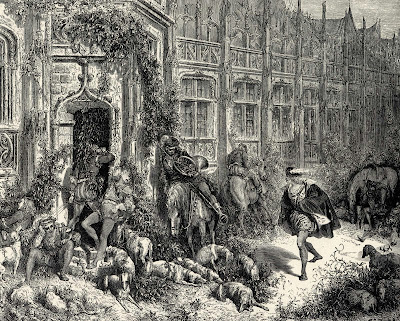 Prince Charming, Reanimator, is running behind schedule.  This is nobody's fault but my own.  It will still be released as a free product, and I will still let you know exactly when it occurs.  I will be no more than a month out of my expected timeframe.  Life just has a way, sometimes, of not letting you get as much done as you would like.

In other news, I am told that 75% of the Angels, Daemons, & Beings Between packages have shipped (although I am still awaiting mine!).  My understanding is that these were delayed due to printing issues, which have been resolved.  If you follow this blog, and have gotten your copies, please chime in so that the rest of us know that they are on the way!

Brave Halfling has hired some folks to help get back on track with the Appendix N adventure modules (again, still awaiting mine).  John Adams at Brave Halfling has had to deal with more than most of us this year, and I truly wish him well.  I certainly looking forward to seeing the print copies, and would love to hear from anyone who has already received them.

Life just has a way, sometimes, of not letting you get as much done as you would like.