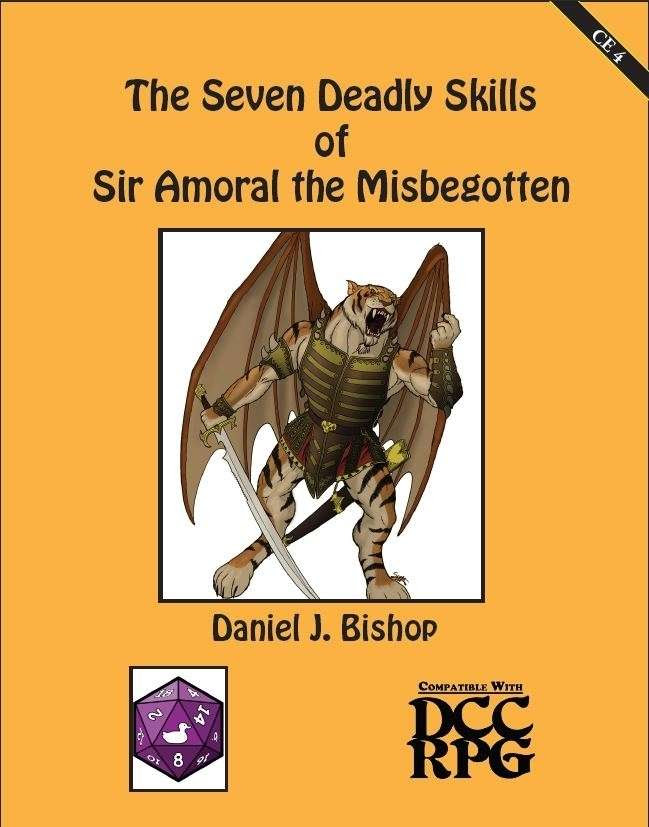 I am proud to announce the release of The Seven Deadly Sins of Sir Amoral the Misbegotten, the fourth in the Campaign Element series.

You can find reviews of the product here and here.

One of the goals with everything I write is that, for each dollar you spend, you ought to get two hours play value out of the material.  I think that the CE series has exceeded this goal so far.  You can use the areas to play through quickly, but the material contains reasons to return, and enduring elements that continue to make your investment pay off.

In years long past, Gryffon Keep was a border fortification guarding a somewhat well-used roadway. In that day, the keep was placed in the trust of Sir Harold Amoral, one of the greatest warriors available to the then Lord Duke. Time has changed the land, and brought the keep low, and Sir Amoral has become little more than a figure of fable and children’s story. That the ruins in the forest were those of fabled Gryffon Keep have been forgotten by most, and the area is now known to locals as the Forest Ruin.

Although history has faded to legend, the ghost of Sir Amoral still haunts the ruined keep. During his lifetime, he sought to hoard his martial knowledge so that it might never be used against him by a mortal foe. Now, after death, he regrets this parsimony, and seeks above all to pass on his skills to those who are worthy.

The catch, of course, is that the ghost believes that only he can determine who is (or is not) worthy – and, of course, his methods for doing this are deadly.

Each of these areas is short enough to be played through by most groups in only a single session. That doesn't mean that the value of the area is limited to a single session – each adventure includes notes on “squeezing it dry”…effectively getting the maximum re-use from your investment.

An adventure for Dungeon Crawl Classics characters across multiple levels.