Frozen In Time and Wilderness Adventuring 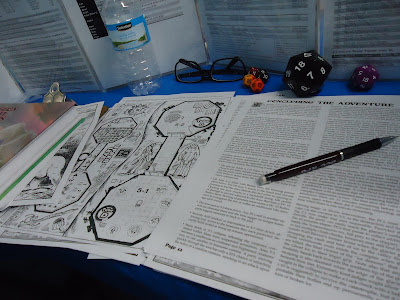 Last Friday, I ran Michael Curtis' excellent Frozen in Time at the Wizard's Cache mini-con.  So, while the module was selling at GenCon, others were having fun with it up here in Toronto.  Overall, this is a great adventure, and one that doesn't take too long to run.

This blog post is going to contain spoilers, so if you don't want to know more about Frozen in Time, skip on ahead.

.
.
.
.
.
.
Okay, then.  This module is ostensibly for 1st level characters, but has rules to allow its use as a 0-level funnel.  When used as a funnel, the PCs are barbaric tribesmen living at a neolithic level of technology.  They might have a few items of standard equipment gathered through trade.  Thankfully, the good people at Purple Sorcerer already have their character generator ready to create 0-levels for this adventure, so creating pregens was a snap.

Picking out highlights is tough.  The players realizing that the paintings they encountered were the Mona Lisa, The Scream, and a few other famous paintings, was great.  The bore bugs were cool.  Having a moment of hesitation between trying to kill or befriend the wounded yeti was good.  The final battle, which I will not spoil here, turned out to be less of a comedy than it potentially could have been, but was still a lot of fun.  I had the opportunity to show the illustration in the module as an actual in-game event.

At the end, as the glacier was breaking up, the party ran to the edge, and so was caught when the glacier crumbled.  With a Luck check (with a -10 penalty) to survive, only one character lived, and that character was not the one carrying any of the loot. 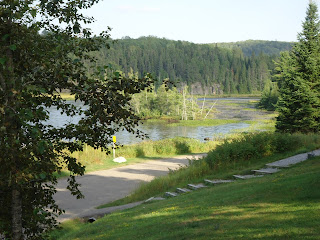 The Sunday after the game, I headed out to the wilds of Algonquin Park, which is a jewel in the crown that is the Ontario Provincial Parks system.  We stayed at the Coon Lake campground, near Rock Lake, and had a great time.

We were on as many as three of the Algonquin trails during any given day.  These included the Centennial Ridges Trail, the Mizzy Lake Trail, the Algonquin Logging Museum, Lookout Trail, the Beaver Pond Trail, and the Spruce Bog Boardwalk.  Walking along these trails really reinforced both how much the land can change in a short space, and how single features can truly make an impression on the traveller.  For example, there were so many potential animal lairs along the first part of the Mizzy Lake Trail that it was clear that no adventurer, no matter how thorough, could hope to examine them all.  On the other hand, few adventurers could pass along the Lookout Trail's highest point without pausing at least for a moment to see the land about them.

When a GM says that riding along some trails is impossible, it takes walking some of these to understand how true that could be.  Scattered rocks, thick webs of tree roots, narrow areas, and areas where you clamber along the top of (or between) rock formations would make it hard for a horse to pass along the trail.  In addition, no matter how clearly marked a trail may be, it is criss-crossed by game trails to a varying degree.

Weather, whether rain or hot sun, can take its toll on the walker.  Depending upon how much travelling is done over rough terrain, the GM may wish to consider penalties related to stress and fatigue.  Resting, of course, helps with this, so that many characters can and should be alternately travelling and resting in order to maximize the distance travelled while remaining in reasonably good condition. 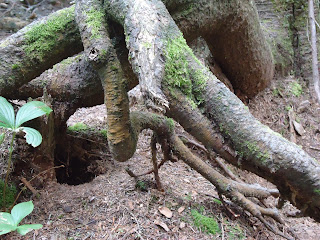 Some systems assume that a character can hunt and/or forage while moving at a standard movement rate.  I would suggest that this not be done.  Finding a clearing filled with blueberries, for example, might cause characters to pause for an hour or more while they eat and fill containers.  I know that we spent more time than this, returning to a blueberry patch to collect more fruit.  Of course, when you are near an obvious potential food source, you are also near other creatures wishing to exploit that food source.  This might improve your own foraging, or it might lead to tragedy.

Sighting normal animals, like a great blue heron, while canoeing, can be thrilling in real life.  Including the texture of landmarks, sightings, trail conditions, and the general hardships and joys of travelling through a wilderness area is worth attempting.  The trick is to make many of these things meaningful in game terms - a lookout allows the PCs to survey part of the land.  That stand of beeches means that bears, which eat the nuts for winter fattening, might be nearby.  The contours of the land indicate where caves might be found.  Knowing that horses cannot be ridden along a trail might allow the PCs to escape mounted pursuers.  And so on. 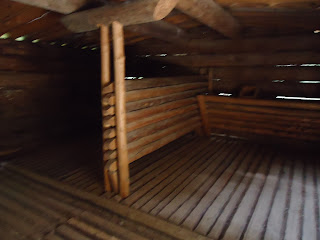 Finally, having a chance to go along the Logging Museum trail allowed a look into the past.  Knowing how things were once done - including how things that we might now take for granted resulted in loss of life - is always worthwhile.  Some future adventure I write will probably include a logging camp cribbed from the real Algonquin lumberjacks.