Learn From My Mistakes!

Cross-posted from this thread on Reddit. This was a thread on judging tricks for people new to Dungeon Crawl Classics, but it touched upon both why I love this game and my GMing philosophy in general. I thought it might be worth sharing to a wider audience.

I posted this advice:

(1) Roll your dice in the open. This is a big part of tension in a role-playing game.

(3) Start with a funnel. It sets the expectation that life is cheap and balance is an illusion.

(4) Have fun. This is so much more important than people might realize, but if you don't have fun running a game, what is the point of running it?

(5) Things will go south. This game is swingy. Spell checks (good or bad), crits, and fumbles call all cause the narrative to turn on a dime. Embrace the chaos. It isn't your job to know how it is all going to end, just to determine what happens now because the entire thing has shifted sideways.

Which is all fine, as far as it goes. Then a post was made about the 1st level cleric spell, blessing. The author of the post seemed to think that it needed serious nerfing, and I disagreed. I wrote: 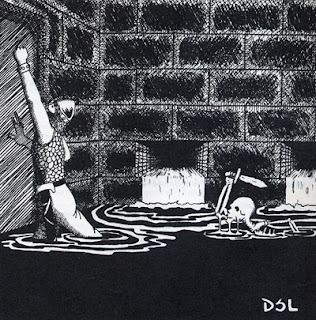 I wouldn't nerf it, personally. Sooner or later the cleric will roll in their disapproval range and you are going to really enjoy that.

Remember that every failed spell check increases disapproval range by 1, and you cannot Luck yourself out of disapproval.

Also, there are natural consequences to clustering around the cleric and waiting for a blessing. You need at least a 28 to get a 30' aura, because the PCs are unlikely to remain within 5' or 10' and be effective. Opponents will not wait for the spell to go off, and will eventually start targeting the cleric if they are intelligent. Theater of the mind (which I use) should not make this difficult; the warrior who charges forward is no longer 5 feet away from the cleric. And if 6 PCs try to stay within 5 feet of one of their number, the judge is 100% correct to deny non-ranged attacks, or even penalize attacks and damage as they get in each other's way like the Six Stooges.

This also requires the cleric to cast the spell on themselves, and whether you are blessing an ally, an object, or yourself should be determined before the dice are rolled. An ally gets a max 20' radius at 32+.

A 6th level cleric with an 18 Personality has a +9 bonus to spell checks, and would have to roll a 19 or better to get a 30' aura blessing. The same cleric at 1st level needs to roll a natural 20 to double their spell check bonus. If this is happening during every combat, the problem is not in the rules.

Also, read the rules about Sinful Use of Divine Power. If the cleric treats their god disrespectfully, there are consequences. Standing outside a door, casting the same spell again and again until you get what you want certainly counts.

As the evening progressed, my thoughts kept circling around to this: 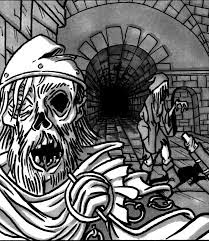 I've been thinking more about this

But DCC is its own thing, and it is swingy, and you are far, far better off just letting what happens...happen. Some games want to force the outcome that the writer/GM envisioned. Or that the players envisioned. DCC is not one of those games.

Distance, spell check requirements, and disapproval already put limits on Blessing. I've had a similar discussion regarding the spell Enlarge, where the judge allowed the player to gain all the bonuses of being 12 feet tall with none of the obvious drawbacks (like door size and ceiling height). If you allow all the benefits, but none of the drawbacks, it isn't the rules that are broken.

In a way, DCC is like gambling. Every class has a trap built into it, where yes, you have this really cool class power (be it Luck Die, spells, Mighty Deeds, etc.), but if you push it too far sooner or later you are going to have to pay the piper. Using that Luck Die (or Lucky Halfling ability) can do amazing things, but it means that your Luck is now lower, and a Luck check may be just around the corner. Spellcasting risks disapproval (for clerics), and patron taint, corruption, or misfire for wizards and elves. That shield bash for the dwarf looks great - but it is also a 1 in 14 chance of a fumble. Those Mighty Deeds put you at the forefront of combat where, sooner or later, something is going to roll a critical against you.

Let them laugh and play while the dice are hot and on their side. You might as well enjoy it. It won't last. Revel with them when they are victorious. It won't last. Roll your dice in the open. Don't pull punches. Don't nerf their clever ideas. The Wheel of Fate is always in motion.

This isn’t what you’d do in, say, Dungeons & Dragons, and is the most important lesson Dungeon Crawl Classics taught me. I didn’t learn it right away. I resisted. But I am glad it got through my thick skull eventually.

Learn from my mistakes!