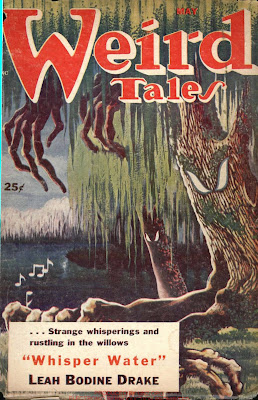 Plants are another category of monster that characters might encounter in a Dungeon Crawl Classics adventure. When you are adjudicating exactly what "plant" or "plant traits" should mean, the main concern is that these things are vegetal. Their lives occur at different time scales. They can be dormant for a very long time. They are probably hardier than they look - as anyone who has attempted to eradicate kudzu or Japanese knotweed can attest - and, if they are woody, weapons like arrows and spears are unlikely to do much (if any) real damage. Their thought processes are farther from human than those of animals, or even un-dead, so that attempts at contacting, controlling, or affecting their minds might be at a significant penalty if it is possible at all.

The judge will also have to consider the effects of being a plant-based monster on Mighty Deeds and critical hits. It would not be a stretch to imagine that some of these do nothing, while others might have a reduced (or even enhanced!) effect. In many cases, the description of a plant creature should give the judge some guidance. In many cases, though, things are left to the interpretation of the person running the game. That is okay; you've got this. The rules bend to you, not the other way around.

It is also notable that, while most plants are immobile, plant monsters are often capable of a surprising range of mobility. Still, there is nothing wrong - and everything right! - with treating some plant monsters almost as hazards which are (literally) rooted to the spot!

Here are three plant monsters you can use in your home game. Note that, while these are inspired by the accompanying images, I did not take the actual text into account. 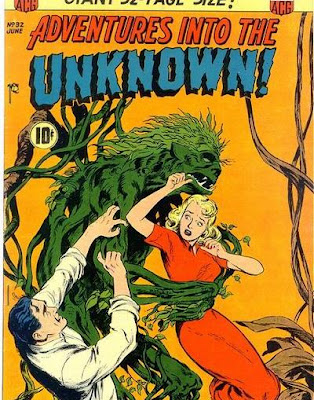 When standing still among green vegetation, walking kudzu is difficult to see, allowing it a +6 bonus to all attempts at hiding.

Its arm-like vine tendrils can grab creatures it hits, allowing it to hold onto them. Held creatures can attempt to escape with an opposed Strength check vs. +4

Why walking kudzu is interested in humanoids from the animal kingdom (including humans, elves, dwarves, halflings, etc.) is a question which is perhaps better not asked (or answered). If the walking kudzu is able to hold such a humanoid for a full 5 rounds, it will plant seeds within it. Without magical aid (1 HD of clerical healing is sufficient), these seeds germinate in 1d5 hours, doing 1d5 damage per turn thereafter. If a victim reaches 0 hp, what remains of it becomes the nucleus of a new walking kudzu. Don't let the illustration fool you; walking kudzu victimize all genders equally. 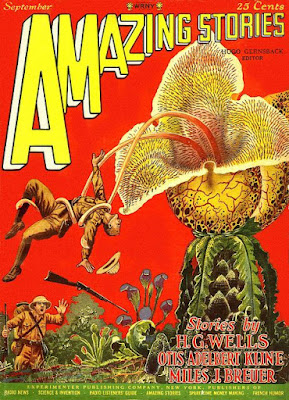 The giant predatory flower can lash out with two stamens, each capable of reaching as far as 30' away. A creature struck by a stamen in automatically captured unless it succeeds in Reflex save equal to the attack roll. Each round, a captured creature may attempt an opposed Strength check (against +6) to escape, and the giant predatory flower can bring prey 10' closer, eventually lifting them into its flower bell, where creatures are drowned within its mildly acidic juices. Climbing out of the flower is a DC 15 check, and each round that a creature spends within it must succeed in a DC 10 check to swim. Creatures failing this check (and most will, as they tire) take 1d6 temporary Stamina damage from drowning. This Stamina damage is fully restored if the creature gets 10 minutes access to air and rest.

Giant predatory flowers are often able to attack with surprise (1 in 3 chance). They capture animal prey, depositing each into their inverted-bell flowers before seeking additional prey. This allows the plant to gain vital nutrients it cannot easily obtain from the soil. Giant predatory flowers are essentially mindless, and cannot be trained, but they are sometimes planted by cruel and devious magicians who have other means to avoid their clutches. 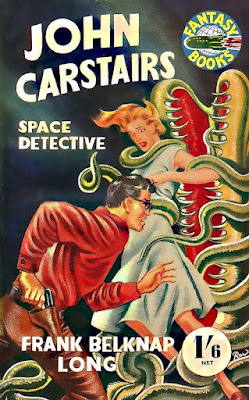 The Venusian human trap is a nasty piece of work which moves slowly around the jungles of Venus, looking for prey. Its myriad tendrils pull it along, but can also grab prey. If a tendril hits, it holds on, requiring a DC 10 Strength or Agility check to escape. Each additional tendril increases the DC of the check by +2, so that a PC grabbed by three tendrils must succeed in a DC 14 check to escape. Each round that a victim remains in the tendrils, it is pulled 1d3' closer to the Venusian human trap's maw per tendril grabbing them.

A Venusian human trap can only "bite" creatures it has pulled into its space. A successful bite attack traps a victim within the plant, where they suffer 1d7 points of damage from digestive acids each round (Fort DC 15 for half). A trapped victim has a 50% chance of taking 1/2 damage each time the entrapping plant is successfully damaged. Worse, it requires a DC 20 Strength check to force open the maw of a living Venusian human trap to allow its victim to escape. The plant can only hold one victim at a time; once a victim is reduced to 0 hp, the plant requires an hour to complete digestion. Feel free to roll the body before this time is up; you might just get lucky!