Empire of the Cyclops Con Debrief 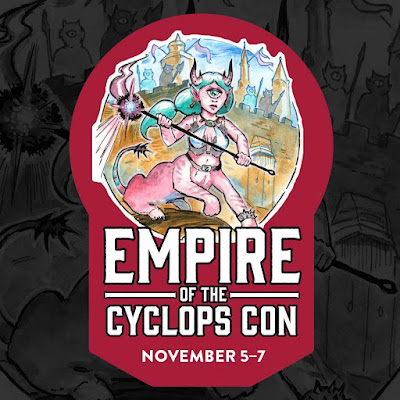 Empire of the Cyclops Con is over, and, once again, I have failed to take any screenshots whatsoever. What can I say? I guess I live in the moment.

Over the course of the convention, I managed to run three adventures, take a couple of quick sojourns into Gather Town, and spend at least a little while at the Social Hour. All in all, I would consider it a success.

I started my Saturday with Fire in the Mountain, skipping the travelling encounters (except for narration) to focus on the events in the dungeon itself. There were surprisingly few deaths, mostly due to my rolls - lots and lots of "1"s for me all convention - and what deaths there were tended to crowd towards the end of the session. I was really pleased that the players found enough clues to put together at least the broad outlines of the backstory.

Because of time constraints, we didn't get past the room with the Impenitent Abbot. The players never discovered that they could not open the door from this side, and there were likely to be more shenanigans with going down the shafts, dealing with the remaining Impenitent, and finally being confronted by three more capering goat things before being able to escape the mountain. They left the stairway to hell open, but we did have some fun with shifting it to new locations. Even with half the zero-level PCs surviving, one player ended up with no one by the end. These are the perils of splitting the party/

After a brief break, I jumped into running The Arwich Grinder. It has been years - years! - since I ran this for a group that included so many unjaded players, and it was a real joy to heap on the darkness as we went. There were also a fair number of survivors, but again my rolls were less spectacular than they should have been. Also, I had Skatch the Elder reminding people to burn Luck rather than fall for my fearful machinations. Most of the deaths were, again, the result either of splitting the party or of failing to take precautions.

I have run this adventure many times, and it was a delight to have the players realize that there are more than eight Curwens. It was truly rewarding that they realized the names Uncle Charles called them in his delirium were not merely random, but must be family members they were not aware of.

Finally, I was lucky enough to have a player who was new to DCC - this was only his second funnel adventure!

On Sunday, I ran Dread Orchid, which is an add-on to the Jungle Tomb of the Mummy Bride kickstarter. The player who had requested a cleric was unable to join, leaving a party that could have survived with caution, but preferred bold action. Because this adventure is not available for generally purchase yet (and the kickstarter backers have not even seen it!) I will omit any details save to say that only the thief survived, and then by the skin of his teeth. The halfling, given a chance due to my rolling two "1"s in a row, came close to escaping, but curiosity did him in.

I would like to offer many thanks to my players over this weekend! You rocked the house and made it fun! Man thanks to David Harvison, Eric Betts, Jim Skach, Joe Colistro, Lucas MacClure, Lucas The Beard, Matthew Shayefar, Michael McMurray, Mike Dawson, Mike McKeown (+1!), Ron Kirkley, Russell Bevers, Todd Hennessey, and Zachary Amsden. If I left anyone off the list, please assume that it is because I am an idiot and forgive me the lapse! A couple of glasses of wine, and I am using the Event Sheets to help me order my thoughts!

Goodman Games has done a hell of a job making the convention approximate the in-person experience, especially with the use of Gather Town. And I love being able to game with people in different parts of the world. Online conventions are something I am likely to continue participating in, especially the Goodman ones and Cons farther afield, such as AlbaCon.

But, man, am I ready for in-person conventions again.

Hopefully, I will see some of you at GaryCon 2022. Right now, I am scheduled to be there in person, and I really hope that comes to pass. I have a fantastic and supportive family,  but I feel guilty taking up the kitchen for the weekend. I feel guilty not giving them my time when I am right here. And the energy around a Discord table, as good as it might be, can never replace the sizzle of playing in person.

Today in Ontario, our Covid-19 case count rose again, and the Effective Reproduction Rate went over 1. This means that, for each person who gets the virus, it will spread to slightly more than one person. This might reverse, or it might turn into a fifth wave. Alll I can really do is hope that we make our collective Luck check.

If things work out, and I make it to GaryCon, please say "Hello" if you see me! I cannot tell you how much it will be appreciated.