Making the World Dangerous and Mysterious 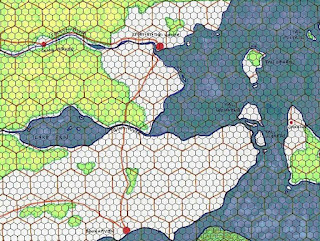 There are two parts to this - dangerous and mysterious.

Dangerous includes running into monsters - but it should also include running into people, dealing with the weather, natural hazards, and things like that. If you read any of the foundational literature from Appendix N, consider taking notes about things that happen when the characters travel. You can recast these as you need.

Mysterious includes special locations, such as standing stones that indicate a nexus of ley lines boosting certain types of magic, cavernous pits or chasms that lead who-knows-where, and lonely ruined castles on hilltops like rotting teeth. Basically, consider a lot of things that might be good or bad, and sprinkle them around. Each of these might lead into an adventure. Or they might be places the PCs return to at some point - the standing stones, for instance, when they want to cast some particular spell.

Both dangers and mysteries provide opportunities to create context for your players' decisions. If they are confronted by patrolling henchmen of the Evil Baron, that is both a danger, and something that allows them to learn about the Evil Baron. If they discover a waterfall into a vast chasm, which they have no reasonable means to descend, they might be able to link that to a river flowing out of a cavern later in their travels.

Remember, too, that an encounter need not mean combat. A cyclops might be waiting at a crossroads because it foresaw the party's arrival in a vision. It might offer to restore one of more PCs' lost Stamina once the recover some item it prizes from a nearby adventure location the cyclops is to large to fit into. Or, perhaps, the cyclops merely says "The Fates have decreed that you shall succeed in this endeavor, or no one."

And it doesn't mean they have to fight the cyclops if they say No. Who knows? Maybe the Fates decreed that they would succeed a year from now? Or ten years?

Also, there are other people in the world. Everyone the PCs meet knows stories of forest demons and hidden valleys where a fortune in jewels are to be had for the taking. Or stories of Elfland, both wondrous and grim. Some of these stories are true. Some have been distorted through long telling. Some are false. And some, whether or not the teller knows it, merely lead the gullible into a monster's gullet.

Give the players things to think about. Imply dangers that are not necessarily met...this time, at least. Let the occasional danger manifest. Suddenly, the world is both as dangerous and as mysterious as you could want!