Terror Island and the Colossus!

OSR Con 5.5 was held at a nice venue, with snacks, water, and soft drinks available for a very reasonable price. There were some cool door prizes as well. I added some DCC bookmarks and temporary tattoos to the table for freebies, and a spare copy of AL 1-5: Stars in the Darkness as a door prize. I also brought a number of DCC products where I had multiple copies to give away at my table – everyone who played got something cool.

I ended up with six players, a combination of those new to DCC and those who had played the game before. I was running the Alpha Playtest of Escape from Terror Island, a DCC funnel adventure, and it should be no surprise to anyone that things will change from this playtest to the final version. The feedback from the players was awesome…and useful.

Time is always an issue with me. There is never enough of it. Since beginning my odyssey writing materials for the DCC game, I’ve managed to run something (or more than one something) on every Free Role-Playing Game Day, and I’ve managed to do a number of other public games as well, but actually making it to even a one-day Con has been pretty much off the radar.

I was very glad to have made it to OSR Con 5.5, and rest assured that I intend to go back next year! 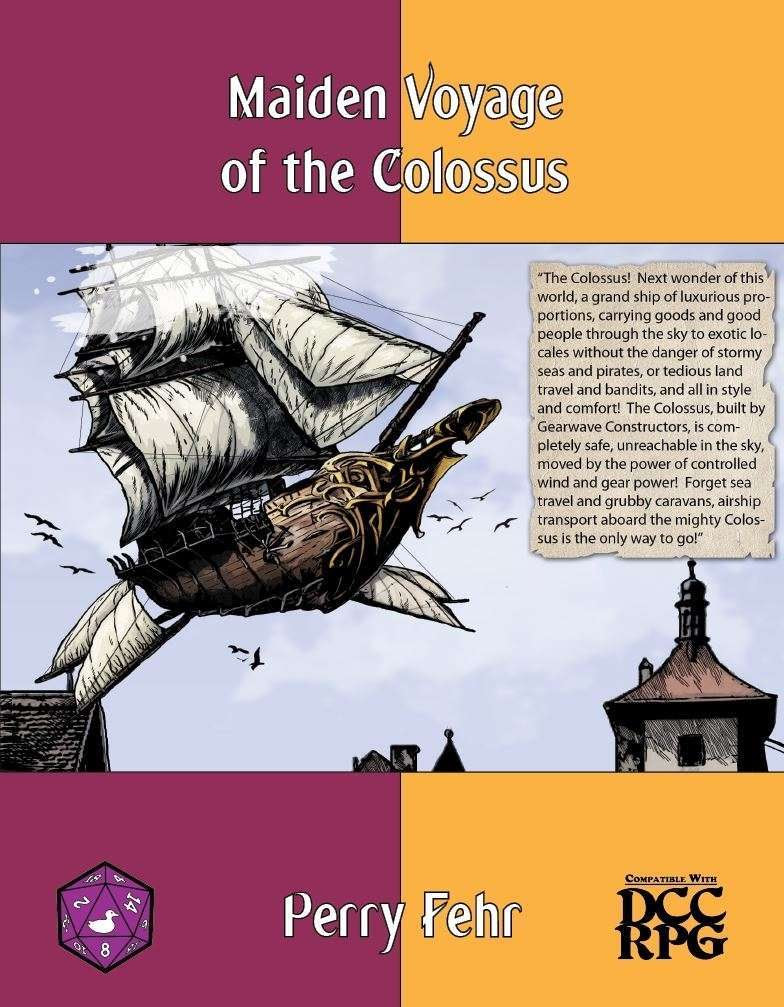 Speaking of playtesting, a few weeks back, I had a chance to playtest Perry Fehr’s Maiden Voyage of the Colossus. This product is now available in pdf format from Purple Duck Games at RPG Now. I understand that there were some problems with the previews for the product (now fixed!), so I am going to describe it briefly: You are tasked with ensuring that a flying ship is not destroyed by sabotage on its maiden voyage. You have four hours. The adventure recommends that you use a real four-hour time limit. There are optional hooks for individual PCs, hidden agendas that can make the adventure more fun. The prospective judge could build some of these into earlier play, to offer foreshadowing.

The adventure is statted for Pathfinder and Dungeon Crawl Classics. This offers the prospective judge a good example of how an adventure for one system can be modified for the other, with what amount to side-by-side examples. A flying ship is a bit out of place in some DCC worlds, although it would work very well in an Anomalous Subsurface Environment-based campaign, Crawling Under a Broken Moon, or on an alien world in Crawljammer. As a singular item, it would work very well in a campaign milieu based off of some of Jack Vance’s writing, or Lin Carter’s.

Just because you are running the game for one system, it doesn't mean that you shouldn't look at the other system's set-up. Use whatever you think will be the most fun!

When I ran the game, I had the PCs summoned as “demons” to the “higher plane” of Porphyria. In addition to allowing me to preserve my own milieu, it established the chance of future trips to Purple Duck’s signature campaign world, and gave me the opportunity to ask, “Now which plane are you from, specifically?” when it was time to go back.

You could easily use such a device to send PCs to the Purple Planet, the Shudder Mountains, or whatever interests you at the time. I send them to Gary Gygax’s Dungeonland, there to meet up with some other PCs (my game takes place across multiple worlds, with multiple character groups run by the same players, and multiple threads) who were in Dungeonland as a “break” from The God-Seed Awakens. The God-Seed Awakens was a divine quest undertaken by PCs from ASE’s Denethix…the Helix/Wolford group was sent by their cleric’s god as additional (and much needed) muscle. At the conclusion of God-Seed, I broke the groups up again, sending each to their own fate…

(As a side note, I did a minimal conversion of Dungeonland, with the intention of later making A Red and Pleasant Land a plane where the PCs could end up visiting….both Carcossa and Narcossa are real possibilities as well.)