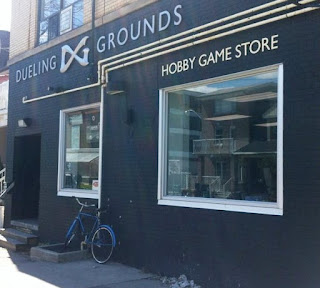 This year for Free RPG Day, I ran The Hypercube of Myt at Duelling Grounds in Toronto. Turnout was fair, and I think that a good time was had by all. We were blessed by the inclusion of Elias Scorsone, author of Wrath of the Frost Queen and Marzio Muscedere, author of Steel and Fury ... and the first-place prize winner of the tournament funnel, who obtained thereby a $40 gift certificate to Duelling Grounds after surviving 13 encounters.

(Second and third prizes were determined by a dice-off with 9 encounters survived each. Prizes awarded were a $20 and a $10 gift certificate, respectively.)

I had intended to keep track of the 0-levels who died in the game, but frankly lost track early on as the Red Stamp of Death was deployed early and often.  I got to hand out some Goodman Games swag, including the Free RPG Day GM’s Screens on behalf of Duelling Grounds, 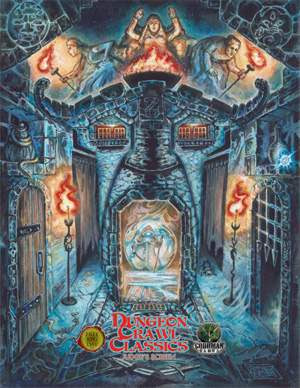 Marzio brought colour print copies of his material to add to the prizes for Death by Nexus at OSRCon 5.5. Elias brought some copies of his adventure to sell through the store, which meant that I have a print copy now for my own fell purposes.

Although I foolishly didn’t bring a camera, I was given an excellent sketch of “Raven Crowking” by Elias Scorsone, who also produced some spot illustrations during the game that (hopefully) will at some time be posted either by that worthy, or appear in some future adventure of his devising.

I was also able to pick up the Goodman Games 5th Edition Free RPG Day offering from the store. Duelling Grounds had some special “GM Swag” for folks running games, but this year, having GMed from 11 to just after 5 without even a bathroom break. Not that I needed one…the pace was brisk and time seemed to fly.

Foolishly, I brought no camera. With the furious action at the table, though, I would probably not have had time to take any pictures.

Thank you all for coming, to those who came. Thanks also to Hypercube organizer Jim Wampler, and co-authors Jim Wampler (again!), Stephen Newton, Dak Ultimak, Adam Muszkiewicz, Jeffrey Tadlock! Thanks also to James V. West, who did the cover art for the Hypercube, which was used more than once during the game to illustrate the visage of Mytus the Mad. And thank you again, Marzio and Elias, for your generosity! 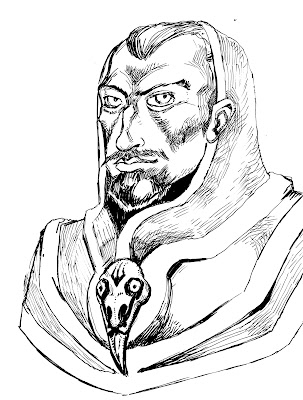