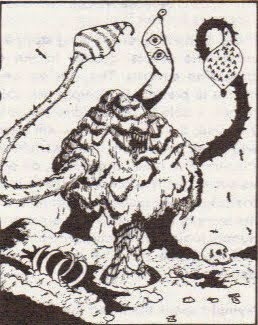 Deep beneath the city, where the offal from the sewers collects in deep pits, dwell the dreaded otyughs. These creatures have three stumpy legs and three tentacles protruding from an oozing mass of diseased flesh. Two of the tentacles are long, ending in spiked paddles that can strike or entwine other creatures. The third tentacle has been modified to support two eyes, allowing the otyugh to see while submerged in the odious contents of its lair. Its central body has a huge mouth with sharp fangs capable of delivering deadly bites. Even if the victim should survive, he may succumb to disease thereafter.

When it makes a tentacle attack, it can reach up to 15’ away. The otyugh must determine if it wishes to attempt a blow or to entwine prey – a blow does more damage, but entwined prey takes 1d4 constriction damage each round and can be drawn 5’ closer. A DC 10 Strength check prevents the otyugh from drawing its prey nearer during any given round; if the check result is 15+, the victim escapes. This check is not free; it requires an Action Die. 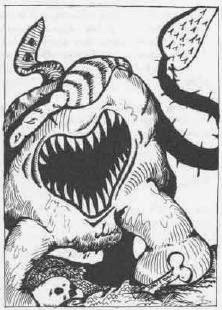 Anyone bit by the otyugh’s filthy maw must make a DC 15 Fort save or suffer 1d3 points of Stamina damage. Thereafter, even if the initial save succeeded, the victim must make an additional DC 10 Fort save each minute or suffer an additional 1 point of Stamina damage. This condition lasts until magically healed, three consecutive saves are successful (including the initial save), or the victim is dead.

Otyughs do not eat freshly killed prey. Instead, they allow bodies to rot for 3d3 weeks before they are fit for consumption. Because of their rubbery hide, they take only half damage from bludgeoning weapons. Their bodies are about 8’ in diameter.

There are persistent rumours of evolved, or neo-otyughs, smaller but smarter than their more common kin. It is possible to speak to, and bargain with, these beings. They often know much about the area they live in – be it a sewer system or a dungeon – and want nothing more than new and interesting carrion and faeces in return.

Don’t ask. The life of an otyugh, evolved or otherwise, is not something most humanoids would wish for.