Now we come to a rather interesting, and open-ended request.

DDogwood says, "I want to see a monster like the crocodile from Peter Pan - it prefers to eat its victims bit by bit, over a long period of time. For example, the first time you encounter it, it might bite off a hand. Then it escapes, but starts stalking its victim. Days later, it might attack again and take the rest of the arm. A few days after that, it takes a foot. Of course, the missing limbs can't be restored unless the monster is slain."

I am of the opinion that the goal is two-fold here. One is to strike fear into the hearts of the players (or, at least, their characters) and the other is to pay tribute to an awesome denizen of our childhood memories. I am therefore going to include some sensory clue that the monster is nearby, like the ticking of the clock in Peter Pan, and I am going to build the creature as a giant reptile. It is important that the sensory clue is similar enough to something else that the players have doubts whether it is the "crocodile" or a "clock" they "hear".


Mechanically, we need a way to bring the PCs into contact with the same monster repeatedly. Unlike Captain Hook, the PCs are not stuck forever in the Neverland. Our monster must have the means to follow its chosen target. 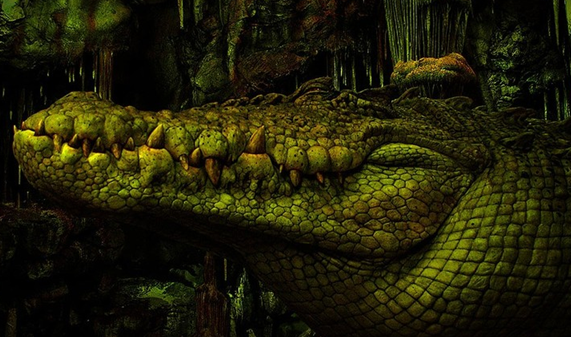 It requires not only a means to appear, but also a means to escape. Perhaps Captain Hook didn’t kill the crocodile because it was Pan’s creature. Perhaps it was impossible. But most PC groups would simply have made an end of it if they could. So we need to make that difficult.

Our design parameter s also include eating a victim a little bit at a time, and the opportunity to heal those little bits (only) after the creature is slain. The sense of being diminished is important for fear, and we are looking at a creature designed to promote fear. Because of the healing requirement, I am not going to have the creature eat its victims physically – instead it will eat little bits of the victim’s soul that correspond to parts of the body, leaving the body whole but with those parts eaten becoming unresponsive.

Let’s start, then, with the crocodile from Peter Pan, and then introduce our new creature. 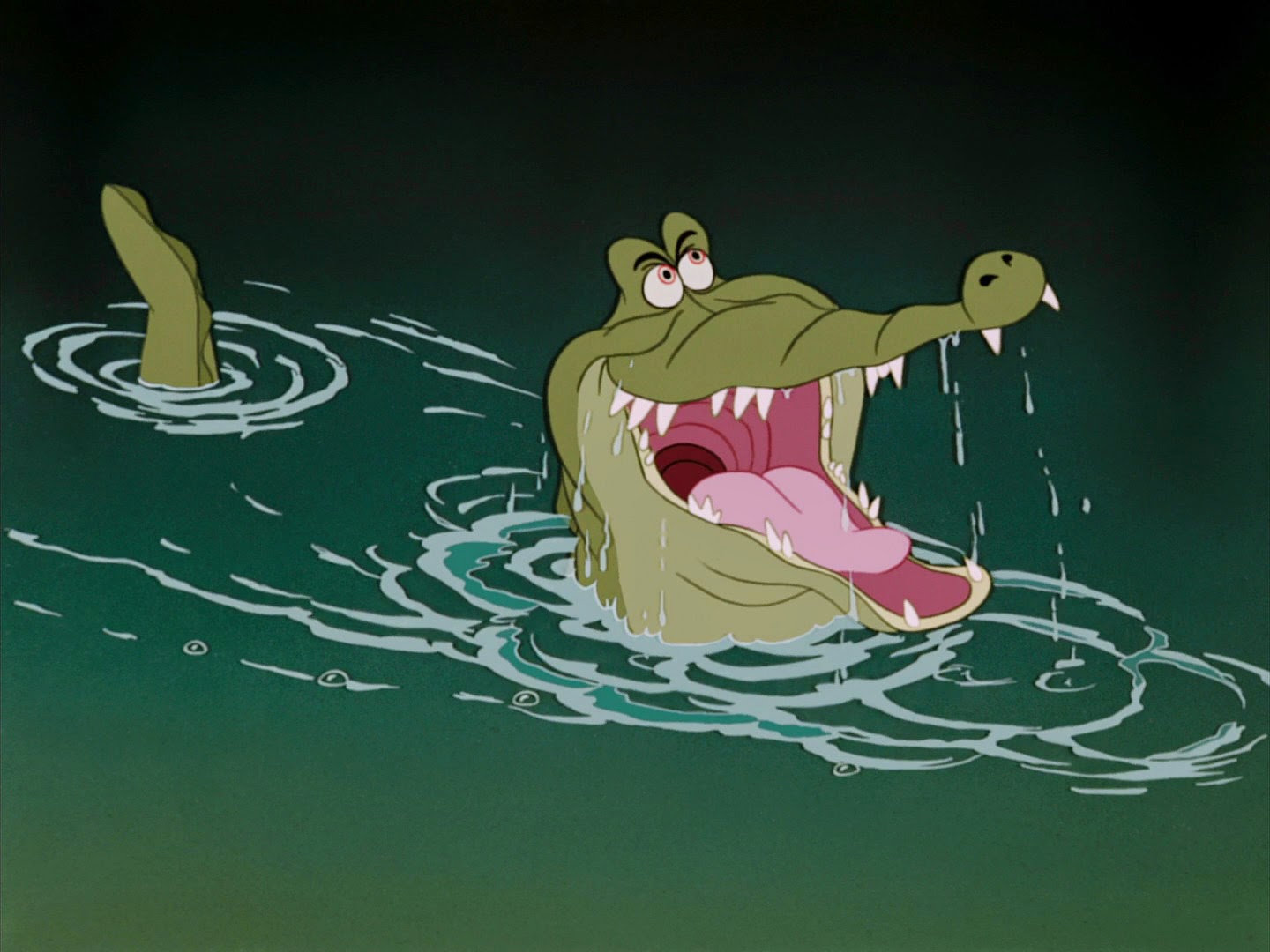 Hook’s crocodile is an enormous saltwater crocodile that haunts the Neverland. When Peter Pan cut off Captain James Hook’s right hand, he fed it to the crocodile. The crocodile liked it so much that it has been following Hook ever since in hopes of getting the rest.

This crocodile gains a +5 bonus to all attempts at hiding, lower than that of typical giant reptiles because of the loud ticking noise it makes…the result of a clock it once swallowed, and which is still undigested, echoing in the crocodile’s innards.

On a natural 19-20, the crocodile can swallow its victim whole. The victim takes 1d6 damage each round, but may attempt a DC 20 Strength check to force his way out. This is something that has happened before, and will happen again, according to J. Barrie’s Peter Pan.

The crocodile can also lunge forward in the first round of combat, covering a move of 40’.

According to some authorities, even if Captain Hook did manage to defeat the crocodile, Pan would simply resurrect it. Possibly with another Hit Die or two.

The soul hunter is an extradimensional  creature that subsists off of the souls of its victims. Its bite passes through flesh without harming it, but tears off a small piece of the victim’s soul, causing 1d3 points of Strength, Agility, or Stamina damage and rendering part of the body useless. The damage reflects the effect of the bite – 1 point of Agility damage might indicate that a few fingers are rendered useless, but, eventually, as the damage adds up, the victim is able to use less and less of his body. The player can choose which ability, from among the three, to take the damage from.

(Some sages and theologians theorize that the soul is suffused throughout the body, so that when an amputee feels “phantom limb pain”, he is in fact feeling the remnant soul which has no bodily housing. The action of the soul hunter is the opposite; the housing remains, but parts of the soul are taken.) 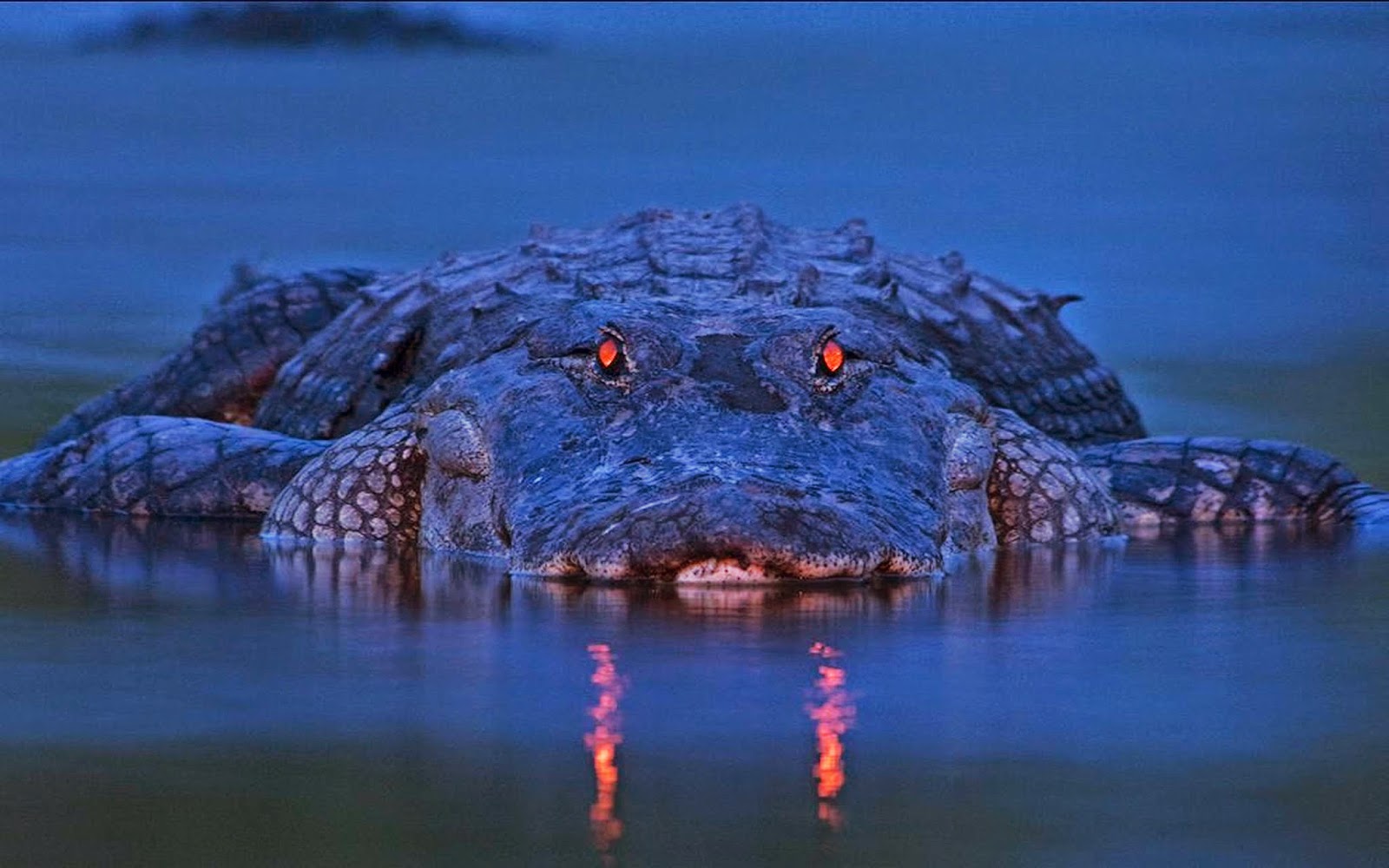 The soul hunter needs very little “food” to survive. After each attack, it retreats into shadows and disappears. This allows prepared characters to attempt a free whack. Thereafter, it is attuned to its current victim’s soul, and cannot feed off of another until the victim’s entire soul is consumed. Every 1d5 days, the creature will crawl out of some shadowy area, attack until it has successfully caused its victim damage, and then retreat again.

The soul hunter’s ability to move through shadows, travelling from any shadowed area to any other shadowy area, anywhere, can be foiled only by full illumination, so that there are no shadows which it can use. Otherwise, even weak shadows allow the creature to pass by using an Action Die, and stronger shadows allow it to pass using a normal move.

The soul hunter looks like a shadowy crocodile, with glowing eyes. Its legs are longer than those of a true crocodile, however. If reduced to 0 hp, it melts into shadows, never to be seen again.
Posted by ravencrowking at 18:51