As previously mentioned, I was scheduled to run three games at Fan Expo 2014, having been asked to volunteer by the wonderful folks in the Toronto Area Gamers.

Friday went well, with a TPK occurring in the cold halls of Ivrian the Unkind. The players failed to listen to Ivrian’s instructions, and the cleric attempted to invoke divine power to deal with the first demon. And failed. They also failed to obtain almost all of the treasures that could have helped them with the adventure – being initially afraid even to touch the magic sword. With very little oomph left to the group, the survivors perished when they met the waspmires on the face of the Cleft Mountain. Still, it was fun. 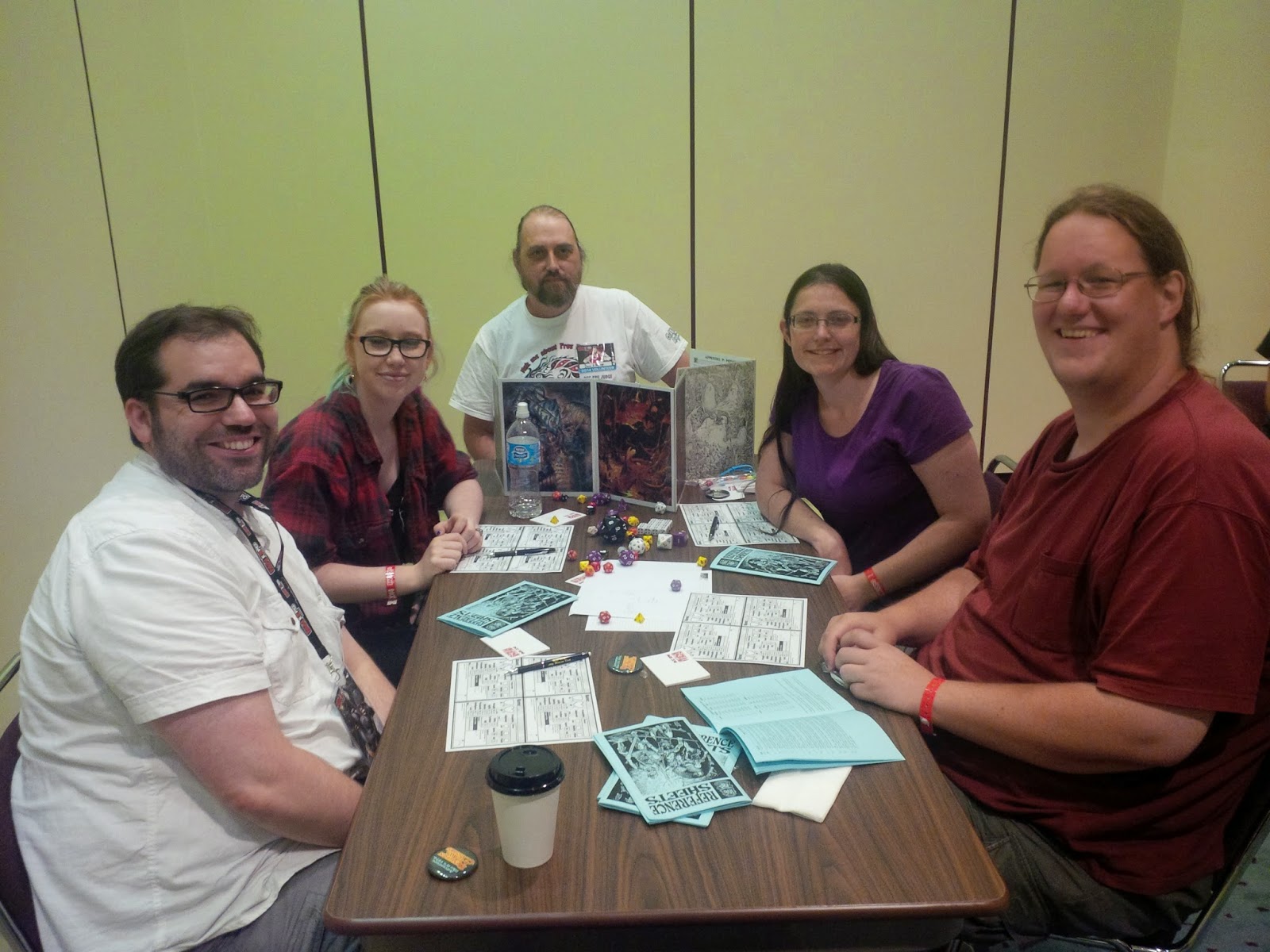 Saturday, I started with five players, but one was taking care of a baby. One should not take care of a baby and play in The Arwich Grinder. He bowed out when they reached the attic. Of the remaining 16 0-level PCs entering the funnel, 14 were still alive when we were warned that the room was going to close about 45 minutes before the game was scheduled to end. They had just begun to examine “Hell on Earth”, so they might not have done as well if we had continued. Still, it was amazingly impressive, as the dice showed the game’s Judge no love, and player caution prevented them from doing anything truly stupid. And it was a lot of fun. Letting the dice fall where they may, if nothing else, ensured that the players knew how exceptionally lucky their 0-level PCs really were.

Sunday, I didn’t have enough sign-ups to run through The Thing in the Chimney, but last-minute players allowed me to run for a foursome. They burned through the adventure, avoiding most of the potential combats, but all dropped when a pair of hands came from the chimney. “You are drawn up into the chimney, one by one. There are some crunching sounds. Then your boots fall into the ashes.” Lovely. Especially in contrast to the humorous tone of the rest of the scenario.

Because there was so much time left, I ruled that the fruitcake helped them (because the halfling ate it all), giving each 2d6 hit points back, and allowed them to face the Cinder Claws himself. Yes, this was a fudge – but it was also a fudge in a one-shot game, where everyone knew it was a fudge (no lying about it!) and agreed to turn the clock back. They also knew what the “real” events had been.

In the ensuing battle, two PCs dropped again before the Cinder Claws was defeated. When rolled over, after being dragged through the portal, they were discovered to be dead. A fruitcake can only do so much.

But the players had burned through the adventure so quickly that I still had half the time left. And they were asking if I had another scenario on me. Having the core rules, I had them generate three 0-level PCs each and ran them through Joseph Goodman’s The Portal Under the Stars. It was well received. In the end, two new “heroes” emerged from the adventure site, and they were the two who ran.

One of the players then asked if he could join my weekly game. This was a young gentleman who had never played DCC before, but who really liked the pace of the game. A lot of things can happen, and you don’t always know what they are going to be!

I was recognized from having run other DCC promo events in the past, which was nice.

You can, apparently, be voted MVP by the other players if you do a good job role-playing being cursed with a desire to eat human flesh.

The big draw this year seemed to be 5E, but Pathfinder retains a strong hold on the Toronto crowd. I didn’t see anyone playing older edition games, which was a bit sad.

The Goodman Games swag program continues to surprise players. I was repeatedly forced to tell people that, really, they could have that mechanical pencil, that button, those bookmarks, that graph paper, etc., because the publisher provided it to me to give away to players.

It was very kind of the Toronto Area Gamers group to invite me to run games this year, and I would certainly be willing to do so in the future. Next time, though, I will be running all-new never-before-seen material, and players willing to chance their PCs’ fates on the dice and my gentle adventure designs may be able to gain playtest credits as a result!