My Date With the Cinder Claws 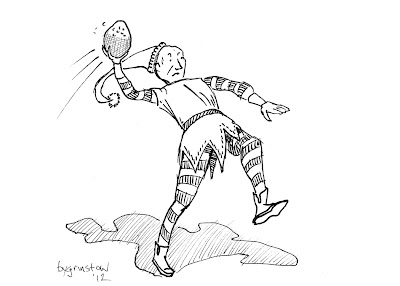 Thursday night was the final gaming night before Christmas, and I ran The Thing in the Chimney for a table of six, two of whom were new gamers, and for whom TTITC was their “zero-level funnel”.  The other characters were the newly-levelled survivors from Fallen Tempesta in my home game….an online version of this adventure is being played out here.

The game started with the characters in the Great Hall, and then almost immediately split up.  Some went to the wood growing at one of the hall, some took the passage to the kitchen, and some stayed in the Great Hall to look around.

There was actually a surprising amount of party-splitting in this adventure, and it had interesting repercussions to game play.  I was surprised and pleased to note that the players immediately began to make a map, and they were not at all confused by the way the Cinder Claws’ home worked….they caught on mighty quick.  I suppose I should not have been surprised, though, as they have been steadily developing in the mapping department.

The characters decided not to disturb the cooks in the kitchen.  One of them stole a couple of cookies, to see if there would be a reaction, but there was none.  They then proceeded through both alternate doors, splitting the party up further.

One group investigated the reindeer stables, but passed on quickly.  A shovel was taken here, that was later put to good use.

Meanwhile, another part of the group discovered the tinsel on the trees, and became aware of the large double-doors.  Throwing caution to the wind, the entered the wood, and met with the tinsel spiders.  One of the other groups came out of the reindeer area and was able to render aid…they fought 3 out of 5 spiders without any real incident.  They fought the other two when they tried to push the door open….and one of the characters, a halfling, got silver glop stuck on his left hand.

They pushed the door open, discovered the wasteland outside, and realized that they could not close it.  Ah, well, spiders don’t like cold.

Needless to say, players began having characters in the scrying chamber check the list to see if they were Naughty or Nice.  This led to one of the PCs (a thief whose occupation was “counterfeiter”) trying to change what the list said, to no avail.  They also, predictably, made attempts to steal the list, and the snow globe.  They were so focused on these items, though, that they ignored or forgot about the rubies on the snow globe stand.

They found the sleigh, and one character took the cindercrop.  Exploration of the enormous red velvet bag was not very thorough, and it was left behind.  The players originally thought that the double doors in the sleigh room and the Great Hall must connect.  Now they are not so sure, because of the events in the Great Hall, and they are considering not opening them.

Dealing with the fruitcake was relatively easy for them, as one of the PCs had previously gained the ability to create strong pheromones once per day, which were used to counteract the fruitcake’s lure.  Throwing the ancient, evil desert into the fireplace, they discovered the empty stockings for the first time.

They also discovered that tinsel spider glop cannot be removed by clerical healing.

Most of the characters return to the Great Hall, where they decide to split up and explore the remaining two archways – half the party heads to the sweatshop, while the other half heads to the guard room.  At the guard room, four elf spears are cast into the front line, and the first character is slain.

At this point, all hell finally breaks loose.  The PCs headed towards the guard room flee, with six elf guards behind them.  The PCs in the sweatshop pass through the green door, and arrive in the guard room behind the other six guards.  Two snowmen are back in the hall where the door has been left open.  In the general melee that follows, one character is killed when a snowman throws a snowball at him, gets a critical hit, shatters the character’s forearm, and does enough damage to down him.  When the other PCs turn over the body, it is too late.

I rule that, due to the distraction of the other characters, the PCs coming through the green door get surprise.  Between two locations, elves, and snowmen, a great deal of fun is to be had.  Someone shouted “knock off their hats!” right away, but no one heeded this advice.  The PCs are battered and bruised, but ultimately victorious.

(As a side note:  The PC whose forearm was broken, and who subsequently died, was a cleric who pushed his luck, had to roll 5d4 for disapproval, and then was found (thus far) to be pretty much a man of the world.  This was the “worst” disapproval rolled at my table yet, or the “best”, depending upon your point of view, but it really reinforced my enjoyment of the system.)

Of course, being players, they had to open the other double doors (giving the sleigh access to outside), and fought the snowman with the ukulele.  I played Burl Ives singing Silver and Gold and Perry Como singing Winter Wonderland to simulate the snowman’s singing.  “Wait a minute….is the snowman really singing that?!?”  “Yes.”

At this point, the night was getting late, and I was ready to fill their stockings.  However, because they kept splitting the party, and there were always folks in the Great Hall, there was no chance for the Cinder Claws to come immediately.  One of the players tried to put the fire out with the snow, but the fire was too great for what she could do with the shovel.  So, she decided to take coals from the fire and burn the wood down instead.  With the resultant smoke and heat, the group scattered out of the Great Hall, and I was able to stage the final encounter.

(That was a pleasantly unexpected action for a player to think of.)

The hands were very effective.  The long, flexible arms were great.  That the Cinder Claws was strong they already knew from the doors; that he was stronger than eight people trying to keep his arm from going back up the chimney was a new, and perhaps frightening, revelation.

When the Cinder Claws actually appeared, though, Fate takes a hand, and the dice roll very hot for the players.  There are a number of critical hits as the Claws pulls itself from the chimney, resulting in its being severely damaged by the beginning of the first round.  It lets out a Ho Ho Ho! and two icicles fall.  The players like that it has a chance of being hit by this.  One PC is hit and killed by falling ice.  And then the PCs remaining lay into the Cinder Claws, and he retreats back up the chimney in a bloody mess.

But that first round has a terrible cost for one PC.  Using my “Slippery Slope of Arcane Doom” house rule, one character tries to learn magic shield on the fly.  He succeeds, but his Mercurial Magic is unfortunate – each time the spell is cast, someone he knows dies.  The Tempesta start includes everyone (apart from the party) in the PCs’ homeland being slain….and the PCs are now on another plane of existence from where they began in any event.  The magic, I rule, utilizes the life force of someone you know to grant the bonus – and one of the PCs dies.

That’s about it.  They grab their stockings, and flee through the portal.  Luckily, they remember to take their moon rover with them.

But that’s another story.

I am thinking of doing another one for next year:  Revenge of the Cinder Claws.  What do you think?

(BTW, if you like bygrinstow's illustration of a sugar plum faerie, above, please drop by his blog and tell him so!)
Posted by ravencrowking at 07:15