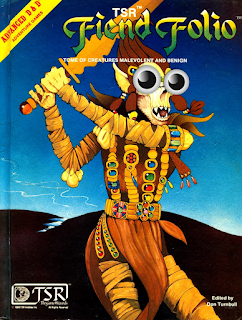 When I was younger, every year Dragon (or The Dragon, should we go back far enough) would include some content which was relatively silly, or which parodies the normal magazine content. A lot of this was, frankly, unusable in a regular game. But every so often there would be content that, while clearly meant to take the piss out of serious gaming, could also be used in a serious game. This, to me, is the holy grail of gaming parody. It may be funny, but, even so, it also works.

My friends can hardly be alone, back in the 80’s, in noting that Slaad and Salad are pretty close. If no one in your gaming group ever made a joke about “ordering the Slaad” that is your loss; it certainly was not ours.

So here I provide you with five additional Slaadi – Lesser Slaadi – for your Dungeon Crawl Classics game. And the important thing is that, if you change the names and adjust a little bit of the content, these creatures are perfectly usable. I did warn you that I was considering a whole secondary hierarchy of Slaadi running parallel to those in the Fiend Folio, and here we are. Instead of running parallel, though, these Lesser Slaadi hope to reincarnate into true Slaadi.

Hold on tight to your dreams!

Smaller than the main slaadi, the lesser slaadi are also extra-planar frog-like monsters resembling batrachians humanoids. Like the slaadi, these creatures are from the plane of Limbo, and worship/obey the same dread masters. Like slaadi, the lesser slaadi believe that, if they act according to the principles of their masters, they will be reincarnated after death into the next rank of slaadi. After progressing through all the lesser ranks, a lesser slaad hopes to become a red slaad in its next life.

Communication: Speech in their own language, understanding all languages, and telepathic communication to a range of 50’.

Magic Resistance: All slaadi have a chance of ignoring a spell (or other magical effect) as though it did not exist. This is rolled as a percentile chance before any applicable save is made.

Spellcasting:  Some lesser slaadi can cast spells, using their Hit Dice as a bonus to the spell check. Lesser slaadi do not suffer corruptions, disapproval, or patron taint, but lose access to any spell for 24 hours if they roll a spell check of 10 or less on that spell. Their spells are psionic in nature, requiring no words, motions, or material components.

Slaadi Symbols: All slaadi, including lesser slaadi, have a magical symbol of rank in the form of a jewel encased in the creature's skull beneath the skin of the forehead. These are artificial devices which encase the slaad's life-force; they may be removed when a salad is held immobile by any spell. On threat of destruction of the gem, an intelligent being may force the monster to fulfill three tasks, if they are within the creature’s capacity. However, when released and the gem replaced, a salad that is not very well rewarded (usually by human slaves to take back to its own plane of existence) turns on its would-be controller with lethal intent. The same occurs immediately upon a fourth task being requested, and a controller who is slow to destroy the stone usually does not survive to learn from their mistake. These jewels are typically valued at 10 gp per Hit Die of the linked salad, but any slaad seeing a symbol held by a non-slaad attack with berserk fury. Each symbol is unique and readily identifiable by any other slaad.

The least of the lesser slaadi, the garden slaad stands only 1’ tall, and is greenish in color with occasional bits of red. They are found lurking in gardens, consuming slugs, beetles, and other pests as commanded by their masters. These slaad may be dressed in various styles, but their statistics are not affected by this.

At a mere 2’ tall, this is the second rank of lesser slaadi. Their appearance is similar to that of the garden slaadi, but with spots of darker hue and of white. Their bodies exude olive oil, which makes them difficult to grasp, and a Greek slaad can escape any form of hold or bond with a DC 10 Reflex save. When slain, a Greek slaad collapses into a pile of dark olives and feta cheese sufficient to feed 1d4 individuals.

Gelatin slaadi come in a variety of colors. Roll 1d5: (1) lime green, (2) lemon yellow, (3) orange, (4) purple, or (5) red. They are semi-translucent, and their inner organs can be faintly seen floating within their bodies, like pieces of fruit. These lesser slaadi stand 3’ tall, and have interior organs which manufacture projectiles they can exude with great force, striking targets 60’ away. As the projectiles must pass through their bodies, each time a gelatin slaad fires a projectile, it takes 1 hp damage.

Gelatin slaadi are wibbly, their bodies being comprised largely of gelatin-like material. As a result, they take half damage from blunt weapons.

Gelatin slaadi are able to cast mirror image. It sometimes seems as though everyone brings a gelatin slaad.

Gelatin slaadi are the third rank of lesser slaadi.

The lumpy potato slaad is pale in color, and stands a 4’ tall. They are cool to the touch, and completely immune to cold. These slaadi can cast chill touch and enlarge. These creature comprise the fourth rank of lesser slaadi.

Greatest of the lesser slaadi, the Caesar slaadi stand a full 5’ tall. Their claw attacks allow them to grab an opponent, who must make an opposed Strength check (vs. +0) to break free. A Caesar slaad has a 1 in 3 chance of opening a gate to Limbo with an action. If they succeed, they may use a move to carry a seized victim into Limbo, to become slaves or food for the true slaadi.

They may cast paralysis, which assists them in capturing victims. 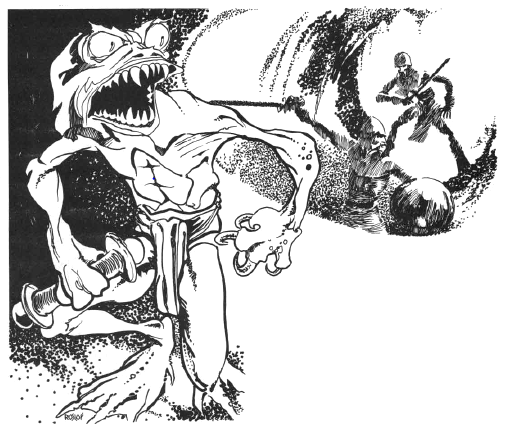