The Cup of Saint Nazrat 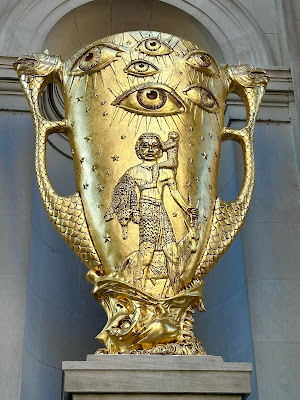 This great golden cup is worked with images of Saint Nazrat, along with his faithful monkey companion Amikin, and an antelope he was no doubt intent on eating raw. Saint Nazrat was a wild man, raised by savage ape-men after his parents were marooned, and subsequently died, on a wild jungle coast. Overlooking all are the six eyes of Hexorbius, one of the Brotherhood of Ten Wizards.

(One sage of dubious character has declared the cup to be related to Belshar of the Five Eyes. When it was point out to this, apparently mathematically challenged, sage that there were, in fact, six eyes, the sage attempted to blame Cyclos of the One Eye for “horn[ing] in on Belshar’s action”. Such sages are not to be trusted.)

The Cup of Saint Nazrat is worth 100 gp for gold value alone, but its true value lies in its connection to both the magic of the Green Man (Saint Nazrat’s primal deity) and Hexorbius of the Six Eyes.

A cleric with access to this cup can fill it with 1 gallon of fresh water. However great the multitude who drink from the cup within the next half hour, there is always just enough water to quench their thirst. Further, the cleric can pour wine into the cup, drink from it, and then allow an injured, diseased, or poisoned creature to drink from it. This transfers all damage, disease, and poison from the second drinker to the cleric, and reduces the Disapproval range of a lawful or neutral cleric by 1d3 if the transfer is significant (as per judge).

A wizard or elf with access to this cup can drip their own blood into it (equal to 1d4 points of spellburn) in order to cast animal summoning using 1d24 for the spell check. The wizard can fill it with clear water, adding in some part of their own blood (as spellburn), and use the cup to scry any location they know. The scrying lasts up to 1 minute per point of spellburn added to the water. Finally, a wizard or elf can drink the still-warm life’s blood of some creature with at least 1 Hit Die from the cup to regain full access to a spell that was lost for the day. Every time a wizard or elf does this, however, they grow an extra eye (to a maximum of six).

A warrior or dwarf who drinks any fluid from this cup instantly and permanently understands the languages of all apes and monkeys.

A thief or halfling with access to this cup can attempt to sell it for its gold piece value.