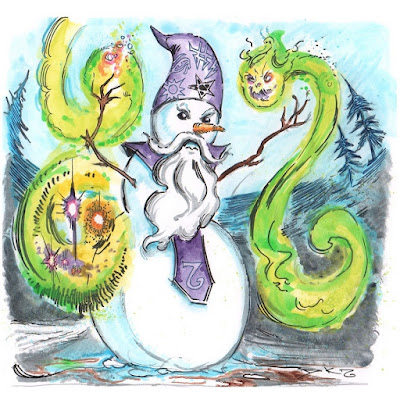 These evil snowmen can hurl snowballs up to 30 feet away, which cause 1d3 points of damage due to intense cold. If the target does not make a DC 10 Fort save, he also suffers 1 point of Stamina damage due to cold. When a snowman is slain, its three snowballs burst into a spray of cold in a 10' radius which causes 1d3 points of temporary Agility damage unless a DC 10 Fort save succeeds.

1.    The snowman creates a ball of green energy and hurls it at a foe with a +3 attack bonus. If it hits, it does 2d6 damage and the green energy turns blood red before dissipating (Fort DC 15 for half damage).

3.    A Green Whisp is summoned (as above), but it continues to attack the snowman's enemies until slain or otherwise dealt with.

4.    The snowman creates a green portal field and hurls it at an enemy. The enemy must succeed in a DC 15 Reflex save or be captured by the portal and sent elsewhere. The judge may choose where the hapless adventurer is sent, or may roll 1d5: (1) The depths of space, (2) the Meat Planet, (3) Flammable Hospital, (4) on the track of Inferno Road, or (5) a lonely asteroid ruin in the midst of a Dog Storm!

5.    A barrage of 3d3 emerald icicles shoots forth, each of which can target a different foe! They are +3 to hit and do 1d3 damage on a successful strike.

Kovacsian Wiazard Snowmen are vulnerable to fire, taking twice the normal damage from heat-based attacks. A snowman who dies due to fire damage does not burst into a spray of cold, either.

The hat of a Kovacsian Wizard Snowman can be removed with a successful Mighty Deed. This causes the snowman to slow down (a cumulative –2 to initiative count each round), and its magic becomes less powerful (roll at -1d on the dice chain per round to determine spell effects, so 1d6 on the 1st round, 1d5 on the 2nd round, 1d4 on the 3rd round, and 1d3 on the 4th round; the snowman cannot thereafter cast spells unless it recovers its hat). The snowman ceases to be animated when its initiative count reaches 0, unless it can recover its hat. Placing the hat back upon its head restores the snowman to its original initiative count. A Kovacsian Wizard Snowman is not “slain” if it stops moving because of losing its hat, and does not burst.

(This creature is based off of the evil snowmen in The Perils of the Cinder Claws and the awesome artwork of the fantastic Doug Kovacs, which is used here with love but without permission.)