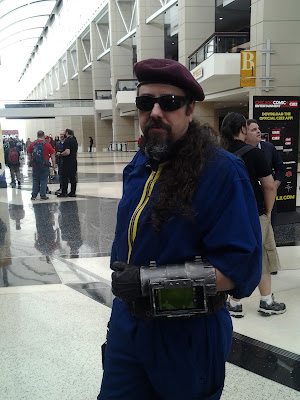 Today we are talking to J. Laakso, owner of Vault 0.
So, for full disclosure, the readers should know that J. is my brother.

Without further ado.....
How did you get into gaming? And what are you doing now?

There was that time when kids were playing cowboys and Indians, cops and robbers, and those sorts of games.  And there were those of us that wanted to be adventurers, so that what's what we did.  Inspired by Lord of the Rings and similar fantasy works, we made up our own stories and acted them out.  Then along comes TSR and publishes a system for fantasy adventure, and it would be an understatement to say that I was pretty drawn to it.  Queue years of playing, writing adventures, gaming groups, and late-night game sessions.  Yeah, I really got into it.  It started with Dungeons and Dragons and went from there.  So many game systems, but I wanted to play them all.

In more recent years I hadn't been gaming so much; life gets in the way, you move around, work long hours, lose track of gaming groups, whatever.  But I'm back to working on adventures.  I have a son that's an avid gamer, and they're waiting for me to run some Call of Cthulhu, DCC, and now MCC.
You supported the Mutant Crawl Classics Kickstarter. What do you think of the system?

Well, as much as I was into D&D, when TSR released Gamma World it really pulled me in.  I'm a huge fan of the post-apocalyptic setting, so when Goodman Games announced the Kickstart for Mutant Crawl Classics I was pretty excited.  It hearkens back to when I first got into gaming and cracked open that box.  Like DCC, MCC isn't rules-heavy.  The PDF is pretty big, but it doesn't spend pages on complicated combat systems or detailing characters to the nth degree.  It leaves room for the players and especially the gamemaster to flesh things out.  It keeps it simple and fun.  There are world details included, which I may or may not use.  Personally I tend to like to create my own world setting, but I can see where GMs would prefer to create the adventure within the world and not a whole world itself.  Goodman Games is pretty good about leaving the game more open to it's users.
Can you tell us a little about Vault 0?

Years ago when I went to my first science fiction convention, costuming was pretty normal though nothing like it is today.  My first costume, in keeping my love of post-apocalyptic worlds, was based off of Road Warrior in the Mad Max movie series.  Taking parts off an old car, I made myself a "road trash" costume.  Nothing that would win awards, but I enjoyed it and it got a few compliments.  And so my venture into costuming began.

Then one day I found myself suddenly laid off, and seemingly unable to get work in my field.  Sometime earlier I had made a Vault Dweller suit based on the video game Fallout.  My first recreation I found to be a disappointment since I tried using a premade boiler suit coverall for the base, which failed to look quite right.  A stickler for details, I looked to the in-game stitch pattern and made my own template and sewn a new suit from base fabric.  And I found some new ways to add the little details like stripes and numbers.  And it occurred to me there are probably other people out there that felt the same way - wanted something that matched the game better.  So I set up shop. 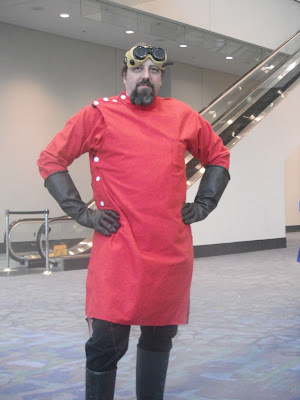 I've sold a fair number of those suits along with some other standard recreations from games and television, as well as a few custom things for people.  I do a lot of shows now, and I carry a lot of cosplay accessories - props, wigs, make-up, etc.  Online sales are great, but the shows are what keep me going.  Meeting the people and attending the conventions - that's the fun bit.
You also do some work with gaming and science fiction conventions. What's that like?

It's a labor of love.  I enjoy the convention scene a lot, and it's surprising what goes in to putting on a show.  Sometimes it seems like your show is only as good as the worse thing you do, and people can be pretty quick to jump on you if something goes wrong.  And there's a mob of social media always waiting to chime in.  But you do it for those who do enjoy the gatherings of similar-minded people, and for a fun time.  I mostly work with non-profits, and no one I know is bound to get rich working on these things.

There is something to be said to be a part of something bigger than yourself, and working with conventions is certainly that.
What are you looking forward to in 2018?

A new day, a new year.  I have plans to do a lot of conventions this year, and work behind the scenes on a few.  With Vault 0 there's a lot of work to do - expand the line, expand the website, and getting ready for the next show.  It never stops, and a small business isn't something you can get too complacent with.  But every sale brings a smile, and every time a customer says something nice about what I'm doing it reminds why I do it.

And, of course, I'm looking forward to a lot of gaming this year.

Link to Vault 0
Posted by ravencrowking at 08:43