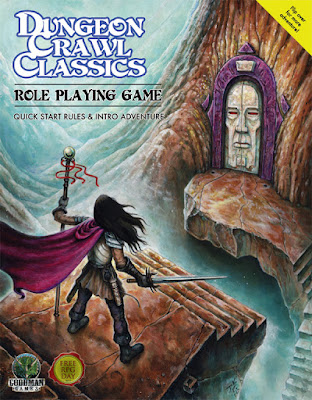 For this year’s Free RPG Day, I ran Michael Curtis’ excellent adventure, Gnole House, at 401 Games in Toronto. I had scheduled the game to start at noon, but the Free RPG Day give-away started in-store at 10 am, and almost everything was gone by the time I got there. Nonetheless, the store had set aside not only enough copies of the Goodman Games Free RPG Day DCC Quick-Starter  to make sure that every player at the table got one, but I was also given a 4th Printing rulebook to give away. And I did.

This was in addition to a print copy of The Revelation of Mulmo – Tentacled Edition – which I contributed from my own private stash.

(Dueling Grounds, which had been my previous go-to for Free RPG Day events, moved to Peterborough this spring, thus requiring me to find a new venue. I had done one event with Hairy Tarantula, but their downtown location closed last year. Nonetheless, I was glad to discover that 401 Games now has more than ample space for gaming, and actually runs a games café with a great selection.)

Because of its location, I had imagined that there would be a good turnout for Free RPG Day, and planned for a maximum of 10 players. I got four, three of whom had never played Dungeon Crawl Classics before, and one of whom was an old hand who had played in my Free RPG Day game last year. 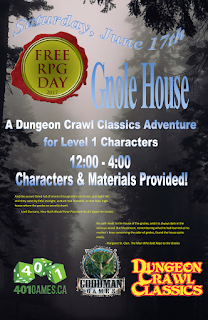 After a brief rundown of class abilities, each player chose a single character out of the 14 that I had pregenerated using the tools at Purple Sorcerer. We ended up with a dwarf, a wizard, a halfling, and a thief. Because there was no cleric, I supplied two doses of the balm of St. Cuthbert, which could heal 1 HD when applied.

Gnole House is based on How NuthWould Have Practiced His Art Upon the Gnoles, by Lord Dunsany, and The Man WhoSold Rope to the Gnoles, by Margaret St. Clair. Both are good (and short!) reads, and if you have never read them you should. Particularly if you are going to run this adventure.

Well, the fearless PCs found their way to the high, narrow house in the wood, looking for both clues as to the fate of that fearless seller of cordage and the emeralds that the gnoles were believed to own. The thief went scouting around the house on his own, prompting the watch-gnole to leave his hollow tree. But, unlike Nuth, the other PCs weren’t willing to allow their companions to die so easily, and shouted a warning from where they watched from the trees.

What followed was the gnole shaking hands and miming human customs, urging his potential next meal into the house.

I have no desire to ruin the adventure, so at this point I am just going to say that a great time was had by all. One player remarked that, for all his years playing D&D, he had never actually been in a “murder house” before. The dwarf turned out to be quite the old-school tactician, using various furnishings to create alarms that would notify the PCs if a secret door opened, checked various pieces of furniture to see if they moved (the secret doors were fixed in place), and so on.

Even with the balm of St. Cuthbert, the dwarf was dropped to 0 hp twice, the halfling once, and the thief once. Only the wizard managed to escape without coming within an inch of death. The dwarf, who had reduced his Luck to 0, only survived by rolling a 4!

Strangely, no “1”s were rolled during the session, and if memory serves the only critical hits were a “16” from the halfling and a backstab from the thief. I rolled dice in the open, as is my custom, and had the players roll damage when they were hit by any creature. This was fortuitous, as more than once absurdly low damage rolls saved the lives of one or another PC, and if the player hadn’t rolled it they probably wouldn’t have believed it.

It should probably be mentioned that the kitchen was made more disturbing when the dwarf made a sandwich.

They forgot the fellow in the tree and, when they tried to set fire to the adventure location, were nearly undone. But, no, the dice went their way yet again! At the end of the session, before handing out swag, I was able to tell the adventurers that they were the first, since Nuth, to ever return from the House of the Gnoles. 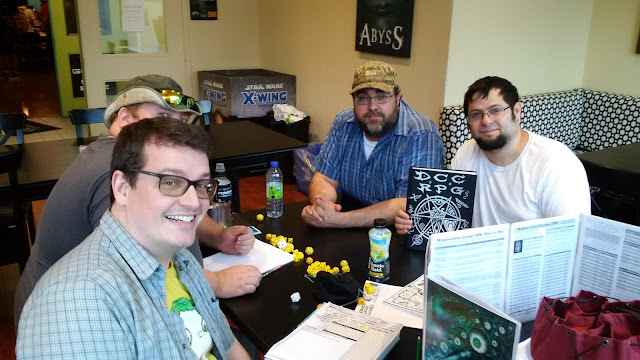