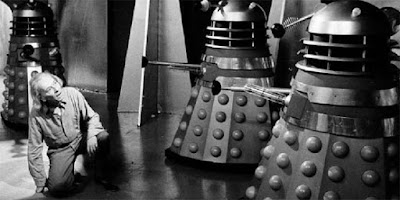 Original Daleks are able to partially paralyze those struck by their energy weapons (2d3 Agility damage, recovered at a rate of 1 point per hour, movement speed reduced by 5’ per 2 points remaining). A second paralysis blast while this temporary damage is in effect requires a DC 20 Fort save, or the new damage is permanent.

Original Daleks are reliant on radiation, taking 1d4 damage each turn their environment has insufficient radiation content. Their travel cases are powered through static electricity conducted through the floor of the Dalek city. If this connection is broken, the Dalek is helpless. 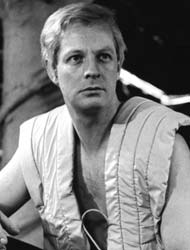 The original Dalek creature, bereft of its cybernetic casing, is fairly defenseless. It has the same reliance on radiation that the original Daleks do. The difference in alignment between a Dalek in its casing and outside is based upon later lore. Daleks are quivering lumps of hate, but the Dalek casing actually programs much of the creature’s behaviour. As we will eventually see, uncased Daleks don’t like their cased brethren very much.

The original Thals were agrarian pacifists, who hoped to come to terms with the Daleks. Their attempt to bypass the Lake of Mutations on Skaro, and then find a way into the Dalek city through caves in the mountains, would make a great DCC funnel adventure.

The Dalek Invasion of Earth 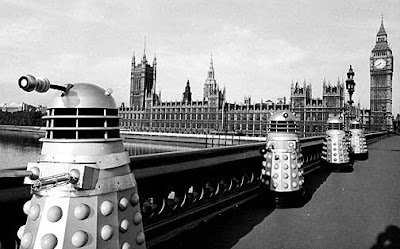 By the time the Daleks invaded the Earth, they had overcome their reliance on radiation and static electricity. These Daleks each had a receiver dish with which they could obtain broadcast power from several Dalek compounds or saucer ships. They no longer sought to paralyze enemies – enemies were to be exterminated

By the time the Daleks invaded the Earth, they had overcome their reliance on radiation and static electricity. These Daleks each had a receiver dish with which they could obtain broadcast power from several Dalek compounds or saucer ships. They no longer sought to paralyze enemies – enemies were to be exterminated.

In the serial, Earth’s magnetic core draws the Daleks to it, destroying them. A similar device could be used in a DCC or MCC Dalek adventure. Travelling across invaded Britain was a big part of the Doctor Who story, and could be used as a funnel adventure. Exploring a crashed Dalek saucer might also make for interesting game play…especially if some of the occupants are still active!

A Dalek can be disabled if its receiver disc is damaged (Mighty Deed 4+), but these Daleks are far more efficient in their long-range communications, and instantly know that the Dalek unit is disabled. 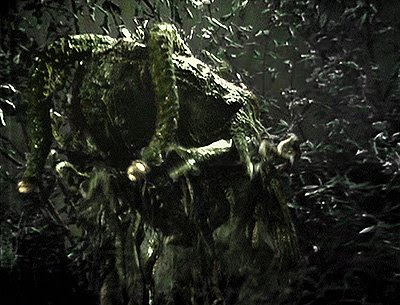 The Slyther was a “pet” of the Black Dalek, unleashed to control the human worker population, and allowed to eat anyone it could catch. It is likely that the Slyther is a Dalek mutant of some sort, larger than a man, and able to attack with multiple claws. It has enhanced sense, able to sense living beings within 100’ without needing to see them. It has a 1 in 3 chance of attacking by surprise, in addition to whatever normal chance the judge uses for other creatures. Finally, it induces fear in its prey – a creature targeted by the Slyther on its first round must succeed in a DC 10 Will save or lose its next action due to sheer terror. 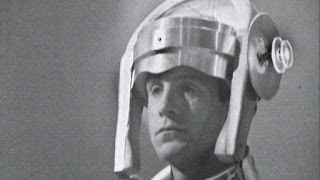 If the Daleks lose control of a Roboman, or on a 1 in 7 chance each time a Roboman is hit, it will go insane, seeking to destroy itself. Under normal circumstances, nothing can restore the humanity of a Roboman. With the strange powers available to Clerics, Wizards, and Mutants, the judge may allow a Roboman to remember who he once was. To this end, it is worth noting that the Daleks tend to choose only intelligent specimens for Robotization.

If these versions of the Daleks seem surprisingly easy to defeat, the author recommends that the reader view the original programs and makes any adjustments he or she sees fit to make. There are several stories, including the original (The Daleks), in which the Daleks are defeated by primitive weapons.
Posted by ravencrowking at 13:37