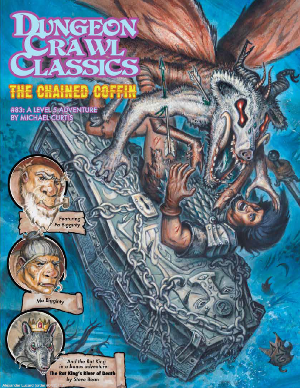 The Peril on the Purple Planet boxed set has gotten a lot of attention, and for good reason. But it is not the only recent boxed set from Goodman Games. I call you attention to the Chained Coffin boxed set, written predominantly by Mr. Michael Curtis. In all fairness, I was given a chance to playtest the adventure with my group, although uncredited, and had nothing but praise for it then. The lack of useful feedback may have something to do with being uncredited.

The main advantage of the boxed set is a fully-realized, non-standard fantasy setting that owes much to the “Silver John” stories of Manly Wade Wellman. The advent of the Dungeon Crawl Classics role-playing game encouraged me to look again at the list of Appendix N authors in the original Dungeon Master’s Guide. Among them were a few authors I had never really read before. Manly Wade Wellman is a strong storyteller, with an excellent voice. I have devoured all of his work that has fallen within my reach…not only John the Balladeer, but also Hok the Mighty.

Michael Cutis has really managed to capture the tone and feel of these stories within a fantasy RPG framework. I don’t know that there is any higher praise I can give without adding spoilers about the adventures herein. Perhaps a secondary, and better, praise can be added: In a recent conversation at the gaming table, returning to the Shudder Mountains has been suggested amongst the players themselves. Perhaps, they say, they should try to find Ol’ Blackcloak again, and this time actually talk to him. 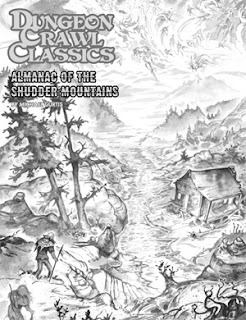 Within the boxed set, you get the titular module, an 11 x 17 map, the Almanac of the Shudder Mountains, the Chained Coffin Companion, Sour Spring Hollow, The Woeful Caves of Yander Mountain, and, if you paid premium, a complex handout for a puzzle in the module. Taken altogether, this gives the prospective judge a funnel, a 3rd level adventure, a 5th level adventure, and enough information on the setting to (1) modify the DCC rules to take advantage of its strengths while (2) having material to play for a long, long time.

Several creatures from Appalachian folklore – or seemingly straight from the pages of the inspirational literature – are also provided, and provided well. As is magic appropriate to the setting. Hell, the whole thing’s good. The only thing I had asked for, and did not get, with this set was a CD of Michael Curtis singing folk songs. I’ve never heard Michael Curtis sing, so it could be a blessing.

These adventures are all good, and, even more importantly, they all capture the right “feel” for the setting. The Chained Coffin itself offers the players a rather unique experience – carrying around an NPC within a coffin that they cannot open. Hopefully, the NPC is who he claims to be. Hopefully, they can make peace with the superstitious folk living on the mountain while carrying around a coffin covered with Chaotic sigils. The climactic encounter of this adventure briefly introduces another location that I, as a judge, immediately wanted to detail and have the players explore. 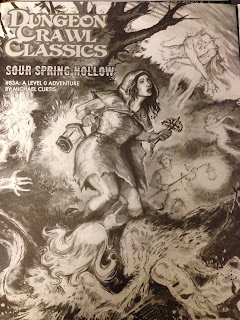 Michael Curtis, I am sure you know what I mean, so get to work on it!

There is also a bonus adventure, The Rat King’s River of Death, by Sean Bean, which is disgustingly worthy in its own right, although it doesn’t necessarily fit into the Shudder Mountains. This adds a level 1 adventure to the brew, and cunning judges will find a way to incorporate the material if they wish.

Finally, if you need more material that can be meshed into your Shudder Mountain campaign, you can easily use my own Arwich Grinder published in Crawl#9, Mermaids from Yuggoth from In the Prison of the Squid Sorcerer (you will note a Silver John reference in this adventure; the first of two adventures for DCC – and both in this product – designed to be played interspersed with other adventures), and (perhaps) even Tomb of the Squonk from PulpWeird Adventures #1.

The Chained Coffin boxed set is well worth the money.

Good gaming!
Posted by ravencrowking at 12:37