Everyone Else III: Sailors on the Starless Sea 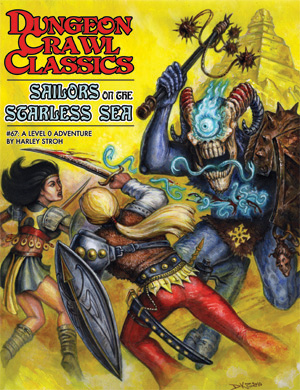 One day, getting ready to begin running a Dungeon Crawl Classics campaign, I stopped at Hairy Tarantula on Yonge Street in Toronto and picked up both Sailors on the Starless Sea (by Harley Stroh) and People of the Pit (by Joseph Goodman).  Being a 0-level module, and having already run Portal Under the Stars using the Beta, I decided that Sailors on the Starless Sea was a logical choice for starting a campaign.

As you may be aware, I have written about designing 0-level adventures for the Dungeon Crawl Classics rpg previously, and my views here are going to take that analysis into account.  There are going to be spoilers in this review as well, so if you are going to be playing in this module, do yourself a serious favour and read no further!

The basic premise of Sailors on the Starless Sea is that cultists are attempting to revive two fallen brother Chaos Lords.  They have been converting local villagers to beast men or preparing them as a sacrifice to bring the Chaos Lords back.  The PCs begin by investigating a local ruined keep, trying to rescue kidnapped villagers.  In the course of their investigation, they become part of truly epic events.

The module also allows the players two chances to replenish their supply of 0-level characters.  This is a good idea, and is something I wish I had thought of in my own analysis of the 0-level funnel.

Following my own analysis, I can certainly see how both character death and character growth are planned for within the context of the module.  Harley Stroh did a stellar job here.

The village the PCs come from is not described, so no difficulties arise from starting occupations.  If you are going to run this as part of a campaign, you might actually take the PC starting occupations as your baseline for describing what the village is like.  The climactic encounter, moreover, may make returning to the village different, so you can gloss over this if you like.  I did.

I had suggested that the initial adventure should include some means for elves to buy one set of mithral armour and one mithral weapon at standard prices when they attain 1st level; Sailors does not do this.  On the other hand, there is no reason why this must immediately be available to Elf PCs.  Obtaining mithral arms and armour may well be part of the next adventure.  This isn’t something you need to worry about, but it is something the prospective judge should keep in mind.

Sailors has more than enough encounters that will make characters progressing into Thieves and Warriors make sense.  Warriors certainly have the opportunity to access to weapons and armour.

Previously, I had written “Potential warriors are also going to need opponents they can fight.  As with the initial offering in the Core Rulebook, this should be a combination of simple and difficult fights, and the difficult fights should be resolvable using brains over brawn.  The opponents must also be interesting, at least some of them demonstrating some unexpected property…even if you only make the giant rats have hand-like paws and be capable of speech.”  There is certainly no problem with Sailors on the Starless Sea in this regard! 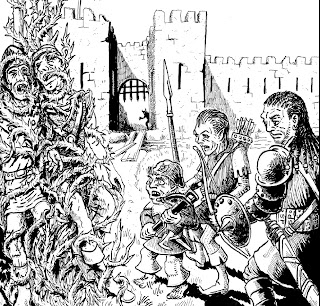 Regarding Clerics, I had written “Your initial funnel must include the divine in some way, shape, or form.  It may include a hidden shrine where the influence of a god is felt, or it may include a fight against some unholy thing in which a holy artefact is of aid.”  Well, Harley Stroh certainly manages to do this, and then some.  From an evil shrine to the Chaos Lords and cultists themselves, the divine (or potentially divine) is felt strongly in this adventure.

I had also been concerned about potential wizards needing a way to access spells, and Harley includes an exceptional means to this end as well – a magic ring that can access three spells for good or for ill.  So, even if you follow the advice in the Core Rulebook, and give XP per encounter, allowing the PCs to level up when they gain 10 XP, the would-be wizards potentially begin their magical careers with something wizardly to do.  Not that Sailors is shy about making them work for it.

I had also expressed some concerns about transition.  Following the Core Rulebook, most of my players’ characters achieved 1st level after a particularly deadly encounter on the Sunless Sea, and thus levelled just prior to the climax of the module.  It was remarked that it felt as though the characters, having survived the deadliest thing so far, had pulled themselves together and were now better able to face what was to come.  This covered both my concerns about transition, and about the 1st-level finale.   The final battle against beast men, cultists, and a resurging Chaos Lord definitely resolved issues arising from the 0-level funnel, and showcased character growth.

I had written that this part of the adventure “answers some unresolved questions, faces similar opponents, and/or fulfils the promises of the first half”.  I believe that Sailors on the Starless Sea does this magnificently.

In addition to the usual Appendix N influences, this module draws from King Kong and The Island of Dr. Moreau for imagery and content.  Well, in a way.  Where Dr. Moreau made beast men out of beasts, the villains in this module make beast men out of men.  I also found this very reminiscent of the "Count Brass" cycle of Michael Moorcock, which may have been the actual source reference.  In any event, they are fun references, and my players had a great deal of fun with this module.  As did I.

Overall, I found Sailors on the Starless Sea to be a nearly perfect 0-level adventure.  I certainly had a hell of a lot of fun running it, and I would recommend it to anyone.

Easily five stars out of five!
Posted by ravencrowking at 14:32