This weekend at Fan Expo Toronto:

Come fill the table!
Posted by ravencrowking at 11:58 No comments:

W is for Walrus

Having foolishly messed up the obvious, and not used my post on the Wampler as my “W is for…” post, I give you the humble walrus.  These mammals, closely related to true seals, runs between 1,800 and 3,700 pounds for a male for a Pacific walrus, with occasionally larger one’s showing up.

Atlantic walruses are a bit smaller, the males clocking in at an average 2,000 pounds. That’s still plenty big.

Some walruses hunt seals, and there have been stories of walruses hunting humans as well, folklore from regions in which these mammals are common. A walrus can take down a fur seal far larger than the average human, and in the excellent BBC Planet Earth documentary series, you can see how a polar bear fares against a walrus colony.

In the real world, people have hunted walruses for food, skins, oil, and ivory. In the fantasy world of Dungeon Crawl Classics, far more aggressive hunting walruses may exist, hunting the hunters in turn. The red walruses of the Blood Ice, for instance, are as much a menace as they are a resource. A spirit-driven walrus may hunt people because it is compelled by the evil that possesses it.

This is a rod made of walrus tusk ivory, carved with scrimshaw figures. Post a description, including what it does, in the Comments, below. Use the rules system of your choice; just indicate what it is. It needs to be your own work.

By posting, you grant permission to treat your entry as Open Gaming Content with the copyright notice “Whatever you named the item, by whatever name appears in your comment, copyright © 2014”.  Example, “Scrimshaw rod, by Raven Crowking, copyright © 2014”.

Contest ends on 1 September 2014. At that time, two winners will be announced. One will be the item I pick as the (subjectively) “best” of those offered; the other will be random-rolled from the remainder. Each winner will receive a complimentary pdf of any Purple Duck Games or Mystic Bull product I have worked on, which I will provide.

In addition, I will work the “best” entry into FT 2: The Portsmouth Mermaid (converted to DCC, if necessary), properly credited, and I will send the author of that entry a free pdf and print copy of the module when it is released.

Posted by ravencrowking at 11:04 2 comments:

The Dungeon of Crows 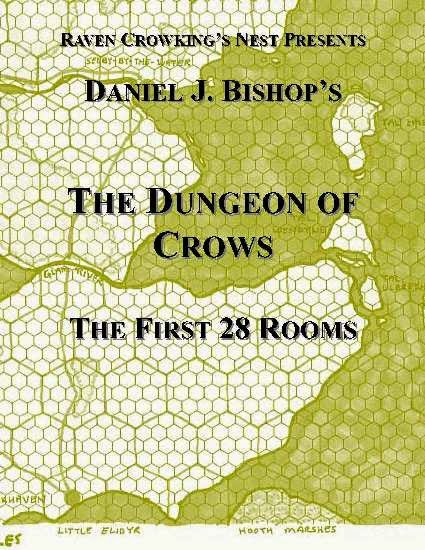 An experiment is live on RPG Now as of now.

And it is Pay What You Want, which means Free unless you feel like paying anything.

Welcome to the Dungeon of Crows, a megadungeon for Labyrinth Lord and other Old School Role-Playing Games!  I have included both ascending and descending AC, as well as additional saving throw information (Fort, Reflex, and Will, ala 3.x and similar games) to make conversion easy.

Within you will find what remains of the Skullheap Goblins, a few vermin known and surprising, a mysterious rhizomatic growth, and the blue and red goop PCs will surely interact with.

This product contains the first 28 encounter areas, as well as a map for the western half of Level 1.  (The eastern half requires navigating the underground lake, or coming up from below.)

Pay What You Want. If there is enough interest, I will continue.
Posted by ravencrowking at 06:57 2 comments:

Playing in an RPG?  Read this!
Posted by ravencrowking at 11:35 No comments: 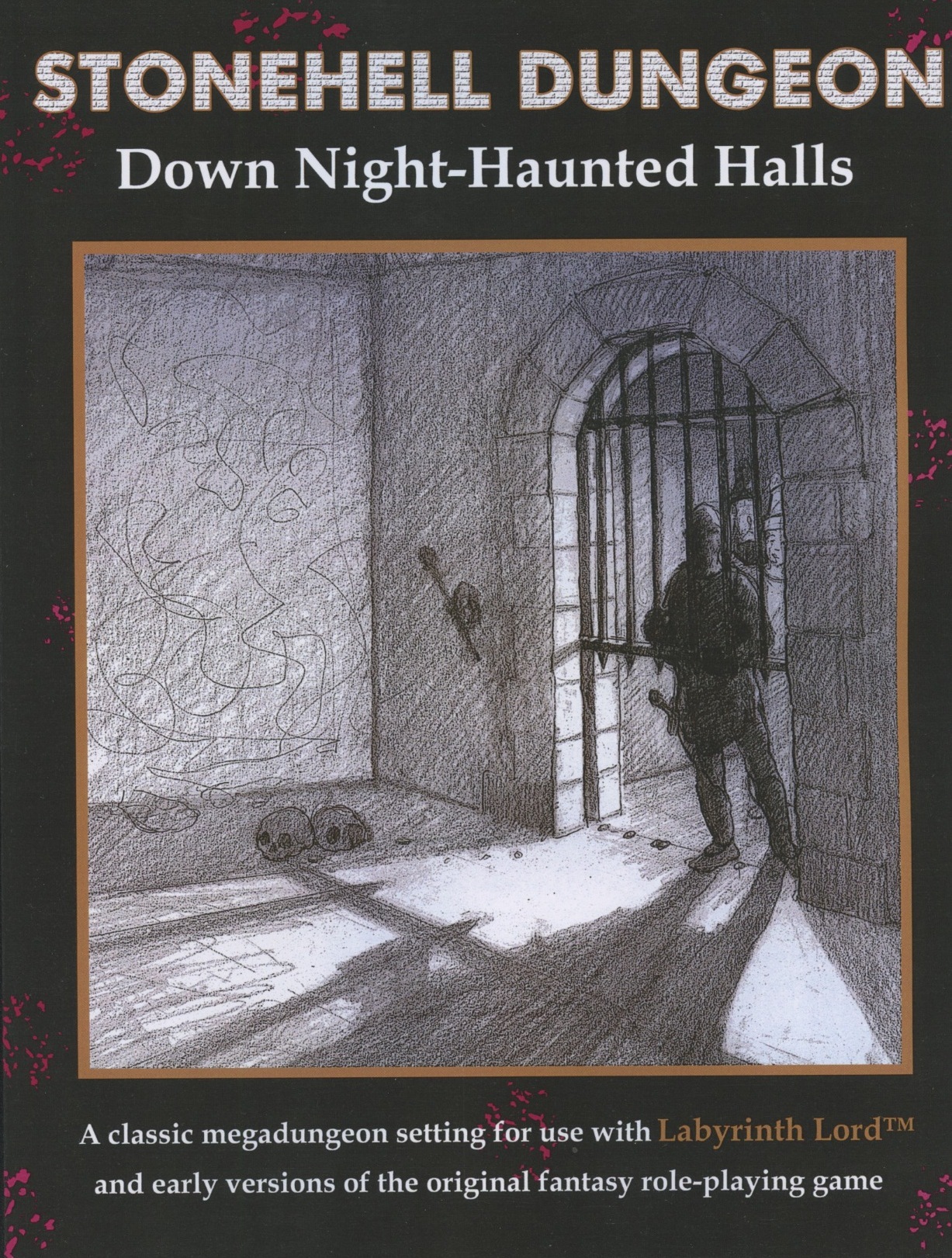 Rosters of players who may or may not make specific sessions due to the vagaries of work, school, and family commitments are a recurrent problem for the modern judge. Simply put, not everyone can make every game night, and sometimes you find yourself being asked to run two separate groups of players on different nights of the week.

Last week, with just two players available, I hauled out Barrowmaze and Barrowmaze II, and allowed the players to create new 0-level characters to go exploring.  They stayed as near to the surface as possible, exploring barrow mounds and having random encounters, until at last the survivors reached 1st level. Then they skedaddled back to Helix.

(As an interesting aside, they actually managed to start on the Barrowmaze II hexmap, thus ending up in more dangerous territory and discovering some nice treasures.)

Tonight, with the same two players being the only ones who could attend, and being asked to allow their characters to do something other than the Barrowmaze (which they frankly view as a death trap!) I offered them another dungeon - Stonehell - to the west toward the mountains, while the Barrowmaze was towards the east. I made each player roll 1d20 on both the Barrowmaze and the Stonehell rumour charts.  They decided to attempt Stonehell on the basis of the rumoured kobold market.

One session in, the PCs have largely explored only the upper ravine area, but they had a lot of fun. Coal is dead (nearly taking the warrior with him), one PC is hoping to raise a wolf cub (he is a halfling keeper of the hounds, and lost 9 teeth to critical hits during the battle with the older wolves!), and they still haven't dared to enter the dark archway that leads to Stonehell proper.

It amazes me to hear some folks say that Dungeon Crawl Classics doesn't mesh well with megadungeons - or vice versa. So long as the players have options, and so long as the area is interesting, my experience is that they work very well together. I have had a lot of fun with DCC and Barrowmaze, and tonight's fun with Stonehell is fresh in my mind as I write this. DCC characters are bad-asses compared to their Labyrinth Lord equivalent, but the unknown effects of die rolls can change a battle from a cakewalk to a nail-biter.

That Helix just became this unhappy village smack-dab between two of the most dangerous places in the world (at least, so far as these PCs know!) also helps bring the world alive for the players. What a place to call home!

Nice work on this adventure setting by Michael Curtis!
Posted by ravencrowking at 00:07 7 comments:

Can be found here.
Posted by ravencrowking at 09:26 No comments:

If you posted a comment here, and got your email address to me, you should have one shiny new mathom in your Inbox. I hope you enjoy it.

If you commented, and sent your email, and for some reason find nothing in your Inbox, please email me directly so that I may rectify the situation. 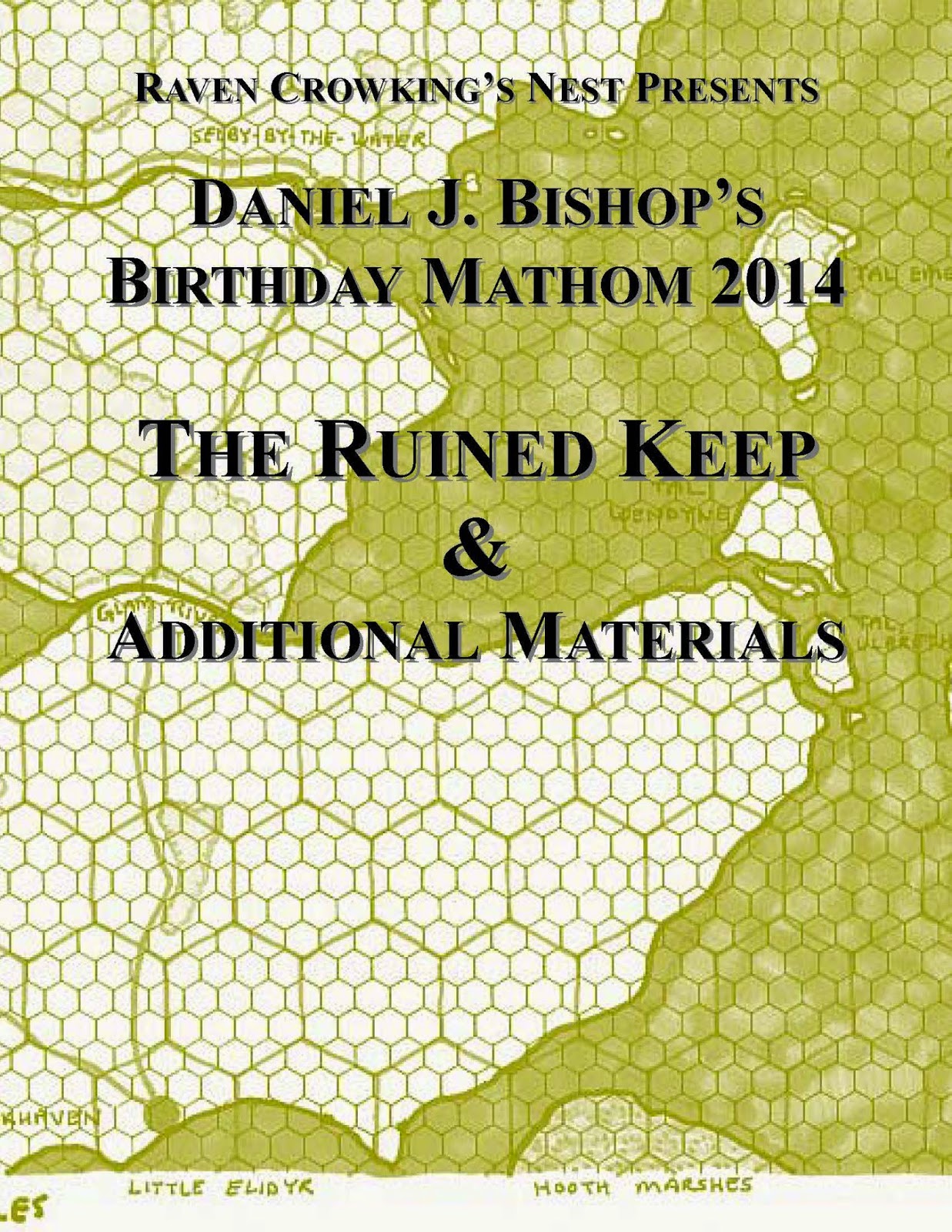 Related to this post, the 2014 mathom is completed, bookmarked, and ready to send on Monday.

Contents include an adventure, some converted monsters, and a few items from Appendix N authors given stats for Dungeon Crawl Classics.

The deadline to qualify for the mathom is whenever I wake up Monday morning.  Once I send the email, that's it.
Posted by ravencrowking at 21:59 No comments:

Ennies voting is closed, and whoever has won has won. Winners to be announced on 15 August at Gen Con. I would like to thank everyone who voted (especially everyone who voted for Prince Charming, Reanimator!) and offer a hearty congratulations to all the winners, whoever they should turn out to be.

This community really is the best.

Posted by ravencrowking at 08:17 No comments: