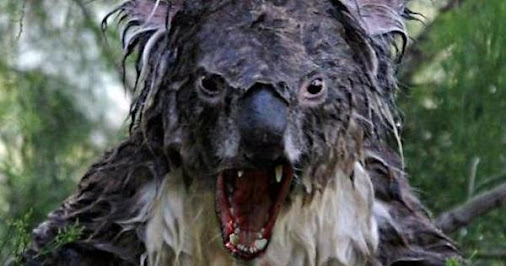 “That thing, I swear, it looked like a koala,” said John. “But no koala’s ever been that big, nor had eyes that looked so evil. The whole thing was drenched, like it had been down in the creek. And its jaws – they weren’t the jaws of nothing I’d ever seen before. More like a dingo or that marsupial wolf they had in Tasmania once.”

John shook, and I passed him my pint. I wasn’t sure I believed him till then. Strange things happen in the Outback, sure. Uncanny, more than like. I’d heard stories of ‘roos that chased men and ate flesh, come up from the Dreamtime. I’d heard of drop bears, then koala-like critters that waited in trees till some bloke walked under, thinking it was just one of them slow-moving eucalyptus feeders up there. Nothing to worry about, right? But they say the drop bear, he eats meat.

I’ve never seen any of them things. Australia’s got enough critters that can kill you without making up more. But when John cupped the beer with his hands, looked down at it, I felt a shiver down my spine. Because I knew – I knew – that this thing was real. More real to John than the untouched beer in front of him.

Despite being nearly as large as a man, the Walkabout Thing is a cunning predator, gaining a +5 bonus to any stealth check.