Virgile Beaudoin wrote “I would always be in for DCC Daleks but a couple of spells or a magic item would also be interesting Are you a fan of Hitchhiker's guide to the galaxy? There could be a couple of fun things in there for DCC. My campaign starts again in a couple of weeks for its second year. 5-6 characters lvl 2 nearing 3. All players whish for magic items or political/cultural/power structures to climb. Anyway, just a couple of ideas. Can't wait to read what you come up with next. ^^”

This, of course, left me open to merging two of my favourite things: Doctor Who and Dungeon Crawl Classics.

By the time of The Chase, the Daleks have developed a form of time travel analogous to the Doctor’s own TARDIS – a time machine that can track other time machines, and is larger on the inside than on the outside. Not only can it track the TARDIS, but it gains on the Doctor and his companions ever so slightly throughout the story. As we will see, Daleks in later-era stories do not always achieve this level of time travelling sophistication.

In some ways, The Chase is a “sequel” (and “prequel”) to the Tom Baker-era story, Genesis of the Daleks. Obviously, Genesis of the Daleks didn’t exist yet in the program, but if we look from the outside, in Genesis the Doctor is sent back in time to the point where the Daleks are created in order to destroy them. In The Chase, the Daleks move back in time to stop the Doctor in his first incarnation. One might almost be considered a response to the other. In fact, this may be the first story where the Time War is foreshadowed. From the perspective of the Daleks, it may take place during the Time War.

The Daleks in this story are no longer dependent upon radiation (as were the ones in The Daleks) and have their own internal power supplies (a departure from The Dalek Invasion of the Earth). Their understanding of humanoids has also improved, allowing them to create a near-perfect duplicate of the Doctor.

It is also worth noting that, while no Dalek is seen levitating up stairs on-screen, the action in The Chase implies that these Daleks are capable of doing so. It is easiest to see this in the Marie Celeste sequence, where Daleks are able to reach areas of the ship only accessible by stairs.

These are still not the Daleks of the new series, however, and they lack several refinements later Daleks will use. If they are part of the Time War, as seems likely, they are part of a group which has significantly less technology available to it than several later Dalek groups. This may be due to changes in the timeline, splintering Dalek factions, or a simple lack of available resources. A lack of resources might place The Chase as post- Day of the Doctor from the Dalek’s perspective, or it might indicate that the Daleks have allocated greater resources elsewhere…such as an all-out attack on Gallifrey itself. 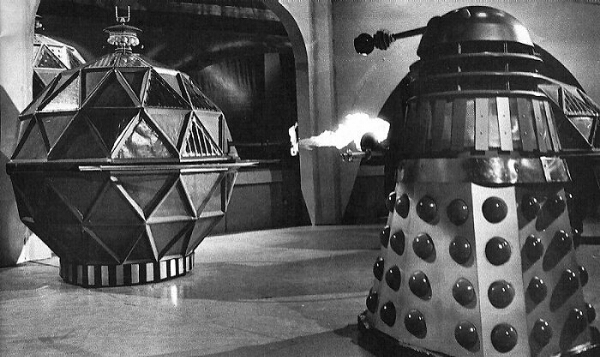 The Daleks in The Chase do not seem to rely on long-range communications as frequently as the Daleks in the previous two stories, although they still retain the ability. They are capable of replacing the plunger arm with specialty arms, such as a long range motion detector. (Earlier Daleks could replace the plunger arm with a high-powered acetylene torch, so this is not a new development.) These Daleks can slowly levitate up stairs, or along a plane not greater than 45º angle. 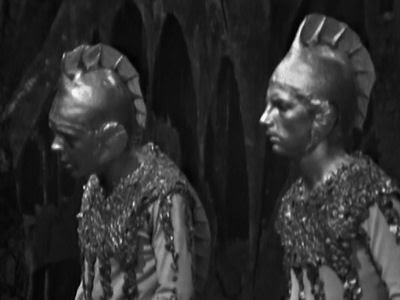 A species of rather ineffective piscine humanoids encountered on the planet Aridius in The Chase, the Aridians lived in the underground remnants of their ancient cities. Over many generations, the oceans of the planet had slowly dried, leaving the Aridians and the Mire Beasts to contest for what remained of the desert world. Not particularly brave, the Aridians attempted to keep the Mire Beasts out by building walls around them. The Aridians also tried to sell out the Doctor and his companions to the Daleks, only to be foiled when the time travellers refused to cooperate. The Aridians would make a great creature for an adventure where you end up liking the people you have to oppose. They mean well, but they are easily frightened into bad choices. 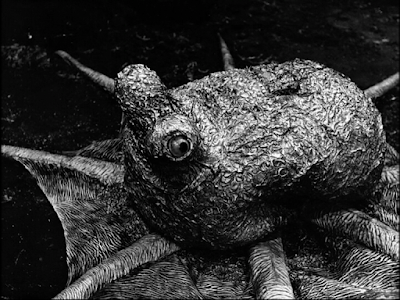 This is an octopus-like creature, adapted to survival in dark caves and tunnels. Mire Beasts are encountered on the surface of Aridius as well, although they are usually active only from twilight to dawn. During the day, they hide by burying themselves in the sand. They are somewhat stealthy, having a 1 in 6 chance to surprise in addition to whatever chance of surprise the judge typically uses.

If a Mire Beast tentacle hits, it grabs the target. The victim can make an opposed Strength check (vs. +4) to break free, cause 5 hp damage (which does not count against the creature’s total), or succeed on a Mighty Deed of 4+. A Mire Beast who grabs a target can either do automatic tentacle damage or make a free bite attack in the next round with a +6 bonus.

Mire Beasts are extremely hardy – even if reduced to 0 hp, they gain a DC 10 Fort save in 1d6 minutes to determine if they were slain or merely stunned. If the save succeeds, the Mire Beast is alive with 2d6 hp recovered.

Mire Beasts possess a cunning intelligence, and are capable of concerted plans and action. 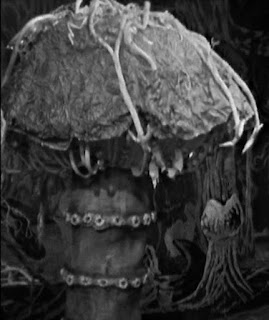 These are tall, fungus-like beings encountered on the planet Mechanus. They make a distinctive “popping” sound, which may be a form of communication among themselves. If they are able to grab a creature with their “umbrella”, they can do 1d3 points of damage each round thereafter due to constriction and suffocation. Although the fungoids do not see in the same way animals do, they are capable of sensing potential prey within 60’ by a combination of sensing heat, motion, vibrations, and sound. They are completely immune to effects that target the mind. 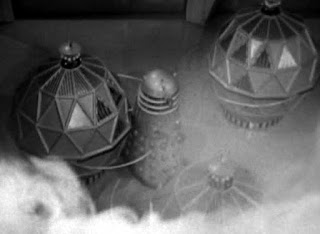 Mechanoids are robots created for the colonization of other worlds. The 1st Doctor and his companions encountered them on Mechanus. They are roughly spherical, with triangular plating. Each has two arms that fold into the Mechanoid. These can be used for skills, or can restrain an opponent they hit (opposed Strength to break free, the Mechanoid gaining +4 per arm restraining a creature, and multiple Mechanoids can restrain the same creature).

Each Mechanoid also has a built-in flame thrower, which can strike multiple targets in a 20’ cone with a 5’ base. Each target in the area takes 1d6 damage (Fort DC 15 for half) and must succeed on a DC 10 Reflex save or catch fire (1d6 damage each round until a save is successful).