All I Have to Do is Dream… 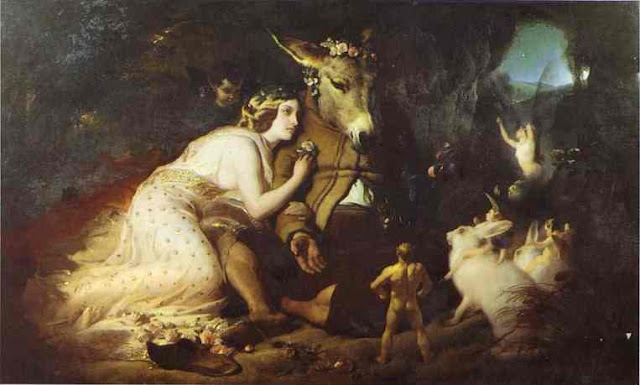 Dream sequences are a significant part of the fiction that inspired the game.  Conan meets with the Epemitreus the Sage in a dream in The Phoenix on the Sword.  Frodo sees Gandalf escape in Orthanc in a dream in The Fellowship of the Ring.  The Dreamlands of H.P. Lovecraft beckon, and John Carter’s adventures on Mars occur while his body sleeps in a near-death state on Earth.  Dreams can reveal information, supply gear, or even be places to adventure in their own right.

The purpose of a simple dream is to supply information to the player/PC involved.  This is what happens when Frodo dreams of Gandalf in The Lord of the Rings.  These dreams may be simply prophetic, or they may be the result of powerful supernatural beings trying to communicate information to the sleeper.  This sort of information is generally coded, and must be interpreted correctly to be of value.

As an example, in one Dungeons & Dragons game I ran, a paladin character was presented with some ethical problems, and was strongly considering acting as the party wished rather than as conscience dictated.  The character had a dream wherein he was confronted with a man juggling nine coloured balls, with the admonition that no one could hold them all at one time.

In another (online) game, I had a dream occur with a parable relating to the current situation.

I find that these sorts of dreams are best represented by writing the dream out, printing it off, and then giving it to the player to read.  Importantly, after the player is done reading it, I take the sheet back.  It is up to the player to note the salient points and write anything down he or she may wish to remember.

Some of these dreams should be red herrings – they are just dreams, and not messages from beyond.

Simple dreams can have effects on the waking characters as well, such as lack of rest or even physical damage, if they arise from a choice the players have made.  See James Raggi’s Death Frost Doom for an excellent example of how choices made by the PCs can have consequences when they sleep. 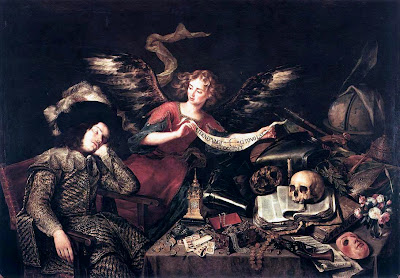 If the character has something to gain other than simple information, it may be worthwhile to briefly play the dream out in-game.  This allows the GM to judge just how much should be gained, if anything at all, in the same way as occurs in other parts of the game.

For instance, imagine that your PC(s), like Conan, gain an audience with some supernatural patron while dreaming.  In this case, how your players choose to react, and what they have their characters say, is probably important enough to the outcome of the sequence to spend game time playing it out.  Character sheets are probably not needed…most dreams of this sort can be resolved simply through description and role-playing.

The simplest form of complex dream allows the character to choose between two options.  For example, imagine that a character is being haunted by a dream hound, which hunts him throughout his sleeping hours.  After a brief description of the hound and the scene, the GM asks the player what he will do.  If the PC confronts the hound, it is rendered powerless, and the haunting ends.  If the PC runs, the hound is empowered, and some debilitation occurs to the PC in the waking world.  Again, the simplest form is that the PC gains no benefit from rest.

Within a complex dream, there is something to be gained, something to be lost, or both.  In order for the choice to be meaningful, it has to meaningfully affect the game in some way.  Otherwise, you are much better off simply treating the sequence as a simple dream, above.

In these sorts of dreams, objects can manifest from the dream world into the material world, as was the case in The Phoenix on the Sword, but that is not the only option.  A dream might unlock the key to a wizard’s spell if the player chooses wisely, or it might grant luck or supernatural patronage.  The level or type of information gained from a dream might be linked to choices made in the dream itself.

Characters can die in dreams.  They may or may not die in real life as a result.  Dream creatures can cause physical injury, or eat away points of Intelligence, Personality, Wisdom, or Charisma (depending upon your game of choice).  At this point, though, dice are going to be rolled, and you are probably looking at a full-on dreamscape.

A dreamscape is a dream which seems to have a physical, objective reality of its own, even if the rules do not conform to those of the waking world.  My module, Through the Cotillion of Hours (Purple Duck Games), is an example of a dreamscape.

Answering (1) will help in answering the remaining questions.  If there is but a single player involved, the dreamscape can spring from that character’s mind.  Otherwise, some supernatural or psychic entity is probably responsible, and that creature can determine to some degree what the conditions of the dreamscape are.  A demon-formed dreamscape is hellish, while that formed by a goddess reflects her theology, portfolio, and symbolism.  If a dreamscape is formed by the mind of a PC, its texture and details arise from what the GM knows of the PC and her experiences.  There is also the possibility that the dreamscape is another plane unto itself, and needs no creature’s thoughts to sustain it.  H.P. Lovecraft’s Dreamlands, and the Barsoom of Edgar Rice Burroughs can be treated in this manner.

So then, what are the rules of our dreamscape?

A dreamscape can be temporary, or recurrent, or enduring.  A temporary dreamscape is intended to exist only for a single adventure.  A recurrent dreamscape is used as the location of a number of adventures, or even the same adventure repeated multiple times until “solved”.  An enduring dreamscape, like Lovecraft’s Dreamlands, can host entire campaigns.

The prospective GM will have to answer, at the very least, the following questions.  It should be noted that, in a game in which dreams play a major part, the answers to these questions can differ with each and every dreamscape encountered, if the GM so desires.  In fact, giving dreams their own rules is part of what differentiates dreams from other adventures.

1. Can the characters will the dream to change?  Can they introduce elements?  Can they change the wallpaper?  If so, how?  What are their limitations?

2. How does magic work in the dream?  If the game system has a cost for magic, does that cost actually get paid by the character, or is the cost part of the dream as well?

4. Are there limitations on the character’s actions?  For example, in a nightmare, the character might attempt to flee, but be unable to move.  This could be given game statistics by reducing movement speed in some or all parts of the dreamscape, requiring a saving throw to act, or other means.

The GM should remember, when describing a dreamscape, that the rules of the waking world need not apply.  Within a dream, it may be entirely possible to have conversations with ghouls, for example, without worrying about having your face eaten.  Characters may be able to fly.  There are no limitations due to time or distance – architecture need not make sense.  It is even possible to have the characters abruptly find themselves in an earlier part of the dream again. 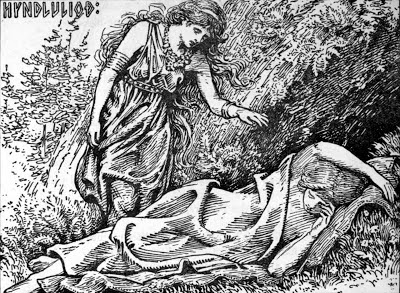 Think about what your own dreams are like.  Use them.  Buy some dream interpretation books.  Use the symbolism in them.  Think up gonzo shit, and have fun with it.

(3), How the characters enter the dreamscape, is important, because it is entirely possible that the characters do not know that they are dreaming.  The Doctor Who story, Amy’s Choice, has the Doctor, Amy, and Rory experiencing two dreams sequentially, with a challenge to discover which is the real world and which is the dream world before they all die.

Randolph Carter enters the Dreamlands intentionally.  John Carter is paralyzed in a cave when he feels his soul detach and head towards Mars.  Through the Cotillion of Hours occurs at some point when the characters are already sleeping.  If the dreamscape actually exists as a plane unto itself, there is no reason that the characters cannot enter it bodily and awake.

Which leads into (4).  Characters entering the dreamscape need not use the same statistics as they do in waking life.  Different dreamscapes can also use different statistics.  There is no reason not to devise a dream in which the PCs are all talking ducks, or panda bears, or goblins.  They could be disembodied, stronger than normal, weaker than normal, or as normal.  They could have to reroll their statistics, and use the new stats in the dreamworld.

In an extended campaign with an enduring dreamscape, each character may have two sheets – one representing his waking self and one representing his dream self.  These need be nothing alike.  They need not even be using the same game system.  They need not even involve the supernatural.  It is easy to imagine, for example a Traveller game wherein there is a machine that allows characters to share dreams.  When hooked up to the machine, characters dream themselves into a Dungeon Crawl Classics game.  If their DCC personae die, they wake up.  Either they can choose to start over, or they can pay X credits to “restore” their personae.

Even within the above scenario, there is no reason that a character cannot have a “dream within a dream” or a separate dream, that uses different statistics and/or follows different rules.  In Star Trek: The Next Generation, the holodeck functions as extended dream sequences, but this did not prevent Jean Luc Picard from experiencing a more visceral dream in The Inner Light.

When a character has more than one set of statistics, and is not aware he or she is dreaming, the GM need not tell the character to switch sheets until game events make statistics relevant.

Dreams are a part of life – once considered an important part – and they can easily be used in role-playing games to offer insight, a sense of connection to the larger supernatural world (in fantasy games, anyway, and perhaps in others, depending upon your tastes), and variety in gaming experience.

Use the different levels of dreams to have different effects in your games.  Use them sparingly or often, use them appropriately, and have fun with them.
Posted by ravencrowking at 09:32