The Dungeon Crawl Classics role-playing game has some of the best adventures on the market. It is almost impossible to go wrong when selecting a DCC adventure. But DCC has a lot of non-adventure material as well, and in this post I am going to highlight some of it. Below are my Top Seven picks for non-adventure DCC materials.

I am excluding materials that I wrote, or otherwise played a significant role in the production of (although I am mentioned in or contributed artwork to some of these).  I have tried to rank these in terms of their general usefulness to the average DCC judge and players, but depending upon your campaign style and interests, YMMV considerably. I also decided to exclude any items that are not explicitly DCC, which is why James Raggi’s excellent Random Esoteric Creature Generator is not on the list (although you should own a copy!).

Please note also that, although some items did not make it onto this list, that by no means indicates that they are below par! I didn’t include Crawling Under a Broken Moon, for example, although I quite like it and think everyone should get it. On another day, it might have made the list.  This is a snapshot of what I am thinking makes the cut today.

This product offers a setting for DCC campaigns to take place in, new monsters, new classes, new patrons, and new spells.  It has very good rules for magic item creation and good rules for maritime adventuring.  Expanded equipment lists, ritual casting rules, and the rules for lucidity are also a real bonus, and could be used by a judge or players to great effect.

This product takes the DCC RPG and places it smack dab in the middle of a Hammer Horror film or a gothic novel, and then dials everything up to 11. The most obvious house rule that judges may steal from this to use in their non-Transylvanian DCC setting, but there are good rules here for character building and investigation as well. The Adversary Die is a rule well worth stealing, if you are working on an adventure that is not simply a dungeon crawl. Two more books are planned for this setting, and when they become available, I will be snagging them as well. Fantastic stuff!

This product offers a good range of monsters, including stats for the various animals that your PCs might acquire through their occupations, making it a valuable resource.  There is a lot of information here about the various creatures listed that most judges will never need, but there is also a very good discussion of how the creature statblocks were derived for those interested in creating their own. There is a good section on travel that the wily judge can use to her advantage. There are also some strange and fun creatures hidden on these pages – I have often glanced through the book and discovered something I had forgotten, which is a hallmark of a good resource.  The book also contains a critical hit table exclusive to Fey creatures, which I have recommended in my FT Series modules.

Finally, Critters, Creatures, & Denizens has an explicit permission allowing you to use a few CCD creatures in your published DCC adventures. This permission is modeled after the permission appearing in Angels, Daemons & Beings Between as a direct result of this author talking to that author. I, personally, would like to see more of this sort of thing in DCC products.

Although I am a fan of all of the DCC zines, not every zine or every issue can make it to the “top seven” list. Even if we exclude the “adventure issues” of Crawl!, we would have seven Crawl!s, three Crawljammers, two Crawling Under a Broken Moon, and one Metal Gods of Ur-Hadad. All of these are good, but Crawljammer #3 has the Psychic Knight, and deals with psionics. Many a DCC campaign can benefit from a cogent treatment of psionics.

(CrawlingUnder a Broken Moon #2  deals with mutants and mutations, and The Wizardarium of Calabraxis has some good alternative psionics rules, but the Wizardarium was excluded because it is an adventure, and I haven’t finished reading through the mutations in CUaBM #2, or it might have made this list.  There are also two “technology wizard” types available; one in Crawljammer #2 and the other in Crawling Under a Broken Moon #1. They are different enough that both might exist within the same game milieu.) 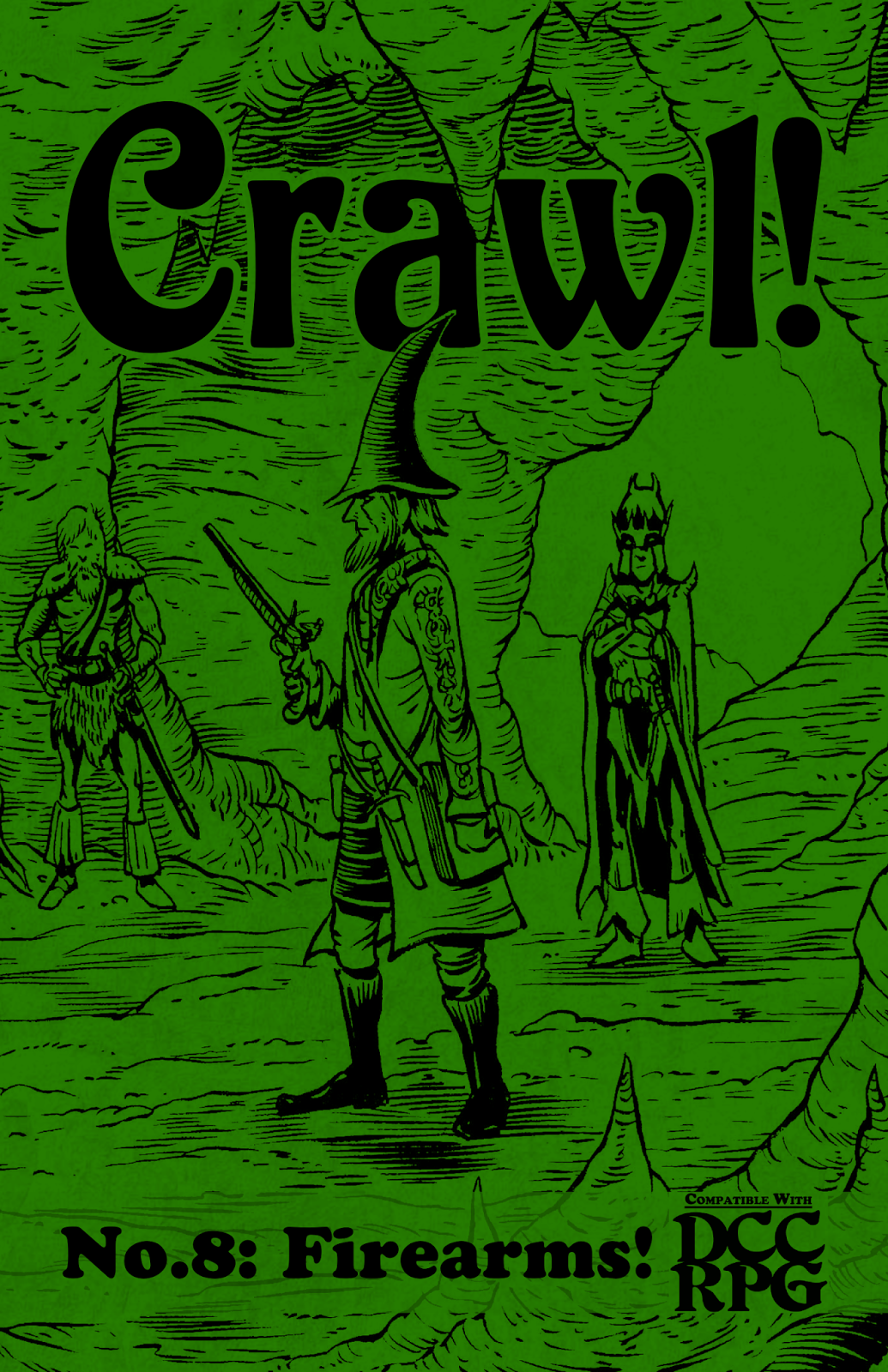 The Firearms Issue. From Wheelock pistols to laser blasters, Crawl! has you covered.  But that is not all, because Rev. Dak Ultimak makes sure that you have some handy tables to use these weapons in your game, in the form of invaders from another world! Whether those invaders are aliens from a distant star, modern humans, or some Revolutionary Era American soldiers, you will be ready.  This issue includes some firearms rules from Transylvanian Adventures, but not all of them. It is definitely a handy at-table reference when you decide that you want the PCs to emulate the majority of Appendix N protagonists – for every Conan who may not have had a pistol, there are two Solomon Kanes who certainly did! – or when you want your PCs to head out into the wastelands of Stephen King’s Gunslinger novels.

If you are running Crawljammer or Crawling Under a Broken Moon, you will find that Crawl! #8 is your friend.

The Loot Issue contains additional equipment lists that are referred to at my table all of the time.  If my copy of Crawl! #2 isn’t available, and the PCs have reached some safe location to recover and gain new supplies, dirty looks are shot in my direction.

There are some other cool things in this issue as well – articles on random treasure, lucky and legendary items, converting OSR treasure hoards, a personality from the Sunken City by Jon Marr, new weapons, and new rules for shields and helmets. But it is Colin Chapman’s extended equipment list that my players dive into again and again.

And the most used resource at my table, apart from the Core Rules themselves? Ever since it came out, every time a character is rolled up, this reference is requested.  First off, it extends the occupation lists considerably.  Secondly, it offers some definitions for the more esoteric occupations which have long since fallen by the wayside (or never existed in some cases). Finally, if you are making higher-level characters, if offers tables that link appropriate occupations to the desired class. This is useful both to players (when, say, creating higher-level PCs to die horrible deaths kick serious ass in some higher-level DCC module, or when bringing a new PC into a higher-level party), and the harried judge when creating NPCs.

Yes, yes, I know, NPCs are different. But sometimes, when you foresee the likelihood of serious ass kicking horrible deaths, you want a ready NPC or two to become PCs as needed.