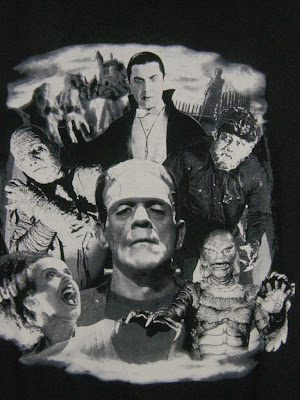 Monsters should be unique, but creatures in the world are not always so.  In the Dungeon Crawl Classics game, Appendix L suggests strongly that certain creatures probably exist in most DCC worlds....their languages do.  Likewise, the descriptions of certain creatures imply as assumption of qualities both known and unknown.

In many of the works from which the game derives, that pantheon suggested by Appendix N of the original Dungeon Master's Guide, there are both unique and recurrent creatures.  Indeed, examining both the DCC rpg modules put out by Goodman Games and by third party publishers, one sees the same thing.  While every adventure has unique creatures, references to the Cyclopedia of Creatures in the core rules is not altogether unheard of.  And creatures devised for one adventure may very well appear in other adventures by the same author.

This is not to suggest that monsters should be "generic" - even the orcs of Middle Earth showed variety between the orcs of Moria, of Mordor, and of Saruman.  Different, too, were the goblins/orcs first encountered by Bilbo in The Hobbit. 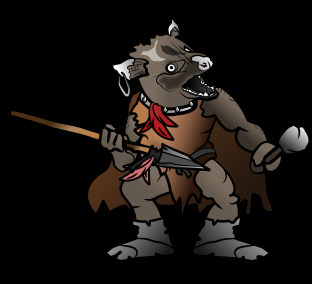 A case in point, related to re-usability of monsters is the existence of opossumen in many of the Purple Sorcerer "Sunken City" series of modules.  One cannot imagine that crocodillos are found in only one location, either.  Certain monsters are clearly more far-ranging than a single adventure location.  And that is as it should be.  While Conan may have fought many unique monsters, it is difficult imagining Middle Earth without orcs and various giant spiders. Note that it is the blend of unique creatures (Tom Bombadil, the barrow wights, the ents of Fangorn Forest, the Guardian of the Pool) and the ubiquitous (orcs, elves, giant spiders, trolls) that makes Middle Earth seem both real and compelling.  In the Conan stories, natural animals and men take the part of JRRT's spiders and orcs (or goblins), but the effect is the same.

A DCC module can be considered not only a unique adventure location, but also a sourcebook for creatures that may be re-used.  Some modules are better for this than others, because some adventures use more truly unique creatures.  While Joseph Goodman's People of the Pit yields little that is not location-specific (although still recommended!), a module such as Michael Curtis' Emirikol Was Framed! or The Sea Queen Escapes offers several creatures that may appear elsewhere in your campaign world.

At the risk of being self-serving, my own CE4: Sir Amoral the Misbegotten has details about nine monsters. While the titular Sir Amoral's ghost is unlikely to be used elsewhere, seven of the other eight are certainly usable in other locations.  Even where a creature is listed as unique, it is not tied to the module's setting. 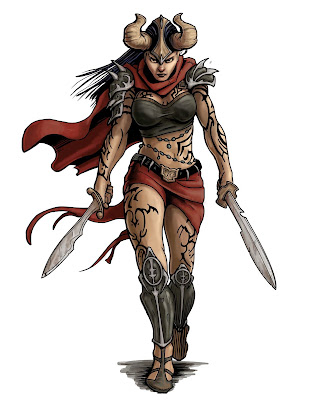 For example the Satryx – a goat-horned humanoid creature whose skin is covered with tattoos denoting strength and power. She bears two short swords, which she can use ambidextrously, allowing her to make two attacks each round. Her skin is like iron. If disarmed, she can spend an Action Die to make one of her swords leap back into her hand with a 1 in 3 chance.

If both weapons are disarmed, she will surrender immediately, bowing and fading away. Her swords are left behind her as proof of victory, and they function for her victor only as if they had a +1 bonus to attack rolls and damage.

There is only one Satryx. She cannot be permanently slain – an attack that would do so simply causes her to fade away (in whatever gory state her body may be in), leaving her swords, to reform the next time she is summoned. Once slain, she cannot be summoned until after the next full moon.

The Satryx might have information about the correct ritual to use patron bond with the King of Elfland, and be sought out for her knowledge.

If you purchase pdfs, the copy & paste function on Adobe Acrobat and your word processing program of choice makes it especially easy to assemble an ever-growing Monster Manual for your home game.  If you purchase only hard-copy products, a few minutes typing can yield the same results with a bit more effort. You may find that copying location-specific creatures is a waste of your time and effort - the goal here is to create a compendium of creatures that can be used for random encounters, or introduced to a scenario of your own creation.

If you are yourself a creator of published adventures, note the generous terms of usage on many 3pp DCC products.  In this case, creating such a Monster Manual (with attribution noted) allows you to have a quick & ready reference for creatures you can use in your published work.  For example, with Dragon's Hoard Publishing, there are a whole host of dinosaurs in Angels, Daemons, & Beings Between that can be used with correct attribution, and in The Revelation of Mulmo, there are lunar creatures just waiting to be used in a published adventure.  Explicitly.

Another good resource for DCC monsters is Appendix M.  My submission for the first issue of DCC Adventure Magazine & News (which really needs its own website so that I can link to it!) contains not one, not eight, not ten, but well over 20 monsters that a clever judge could make great use of...

OGL info for the Satryx: