Everyone Else VIII: Attack of the Frawgs! 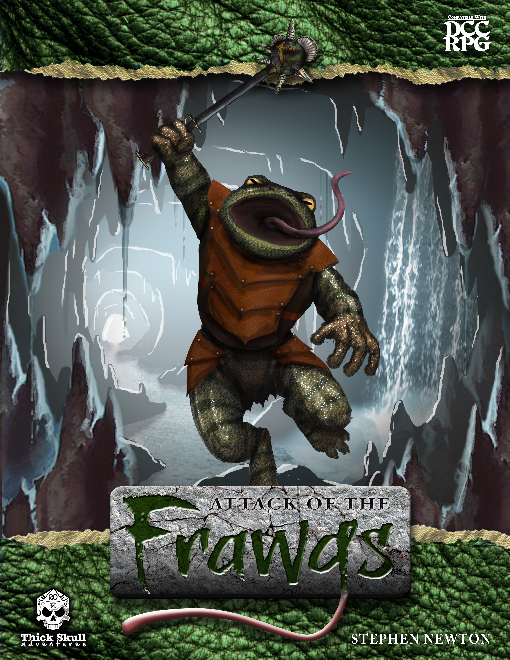 Attack of the Frawgs!, by Stephen Newton, is the first module from Thick Skull Adventures for the Dungeon Crawl Classics role-playing game.  It is the first in an intended series, to be followed by the Princes of Kaimai adventure series.

This is the first DCC module I played which had direct ties back to DCC’s D&D (via the OGL) roots – the background mentions various humanoids, and the setting is the closest to a “D&D normal” setting I’ve seen with DCC.  This is neither good nor bad, and I used the connection to set my home campaign’s version of Barrowmaze I close by.

The adventure is largely a wilderness-based one.  Like Doom of the Savage Kings and The Ooze Pits of Jonas Gralk, it is a wilderness that you r players are not simply going to wander about in.  The encounters placed here all range around a lake, so, unless your 0-level funnel characters miraculously have a boat, there is a definite order to the encounters.  This is, again, neither good nor bad intrinsically, but I look forward to a DCC hexcrawl.  The encounters here are a bit linear for my taste, but my players definitely enjoyed it.

The module intro suggests that the action starts at dusk, but all of the area descriptions assume daytime, so make sure that you account for that in your setup when running this adventure.  It’s a pretty simple matter to tell the players that their ardour cooled with the approaching dark, and it seemed better to investigate when the sun was up.

It is also clear that this module was intended as a prologue to another adventure…it leaves some large questions in the players’ minds, which are waiting for future releases to answer.  Things happen in the adventure writing game, and in real life while you are trying to write adventure modules, so I understand why the next instalment isn’t available yet…but I am sometimes impatient.

Okay, enough of mild complaints, and on to what I liked!

This module includes giant casteroids which seem to be a cross between a beaver and a bear.  Naturally, my players had to explore the dam/lodge of these creatures….singularly, this is what I thought was the best encounter in the module, and I hope they make an appearance in future releases.  I cannot even say exactly why I like this encounter so much.  It is just that I can really picture it in my mind, perhaps, or that the PCs are stuck in a truly unusual location.

My players are usually pretty canny, and they were able to deal with most of the lead-up encounters pretty easily.  This is not a complaint; smart play should be rewarded, and it is usually where PCs blunder in that they are lost.  The lake itself, offering a relatively clear field of view, changes the nature of encounters and allows the players an opportunity to plan for some of them at least.  It offered a very different feel, at my table at least, to have the 0-level funnel characters actually seem relatively competent.  Of course, the final encounters in the caverns more than make up for that, so all is well in terms of character attrition as well.

My players are relatively slow-going as well.  They average three sessions per module, so I was somewhat surprised when they finished Attack of the Frawgs! with enough time to start another adventure.   Partly, this is because Attack is a relatively slender module, and in part this is because the nature of the encounters around the lake make the players’ choices more obvious.

Were I seeking a game for a convention, or a demonstration, where players familiar with D&D had a limited time to generate characters and play through a scenario, Frawgs would be my top choice.  If I were looking to make use of older D&D modules, or modules for “retro-clone” games like Labyrinth Lord, Frawgs is a good introductory funnel.  I haven’t been disappointed by anything Joseph Goodman has approved yet.  I will certainly be getting the Princes of Kaimai adventure series when it becomes available.

Make no mistake, though, Attack of the Frawgs! cleaves far closer to the game’s D&D roots than does the Goodman Games or Purple Sorcerer modules.  This means that it is instantly graspable by players new to DCC (but not rpgs), but it also means that the judge might long for more of the “weird fantasy” elements of other DCC adventures.  Haunting of Larvik Island is slated as a remake of a 4th Edition module, so there will continue to be obvious ties to D&D in all likelihood.

Personally, I would encourage the author to move farther from standard D&D tropes as the Princes of Kaimai series expands, but I am also interested in whatever Stephen Newton chooses to do with the series.  It worked quite well for me as a set-up for Barrowmaze I.

Should you get it?  I did, first in pdf and then in print when print became available.  I feel that my money was well spent.  I will continue to buy from Thick Skull when more product becomes available.  But, while waiting for Haunting of Larvik Island, I do have to warn you that you might want more answers immediately for your heroes of Dead Goblin Lake....
Posted by ravencrowking at 20:24